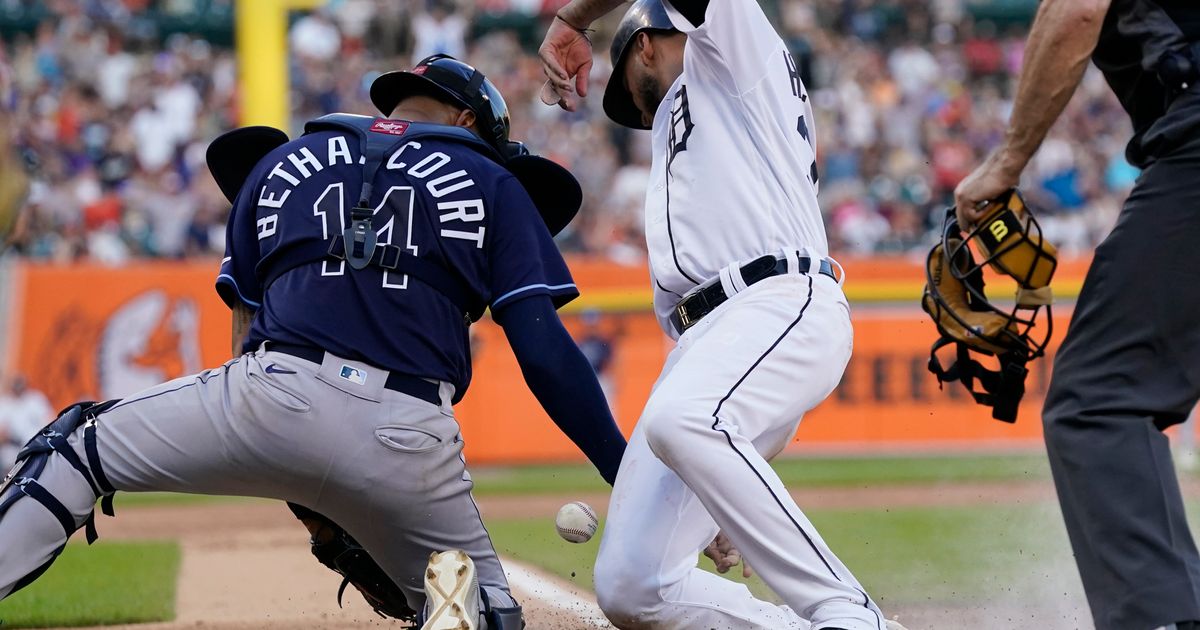 DETROIT (AP) — Harold Castro drove in two runs and scored twice as the Detroit Tigers ended a three-game skid with a 9-1 win Saturday over All-Star Shane McClanahan and the Tampa Bay Rays on Lou Whitaker Night.

Playing in front of their first sellout crowd since opening day, the Tigers won for the fifth time in 16 games on the night they retired Whitaker’s No. 1. Garrett Hill (2-3) picked up the win, allowing one run in 5 1/3 innings.

Tampa Bay loaded the bases with one out in the first, but Jose Siri flew out to shallow center before Hill struck out Luke Raley.

Yu Chang gave the Rays a 1-0 lead with a second-inning homer, but the Rays missed another opportunity in the fifth. Tampa Bay, which stranded 13 runners in Friday’s 5-3 win, had runners on second and third with one out, but David Peralta grounded to Javier Baez, who threw out Brandon Lowe at the plate. Hill struck out Siri to end the inning.

Detroit went ahead 2-1 in their half of the fifth. Willi Castro doubled, took third on a flyball to center and scored the tying run on Harold Castro’s base hit. Harold Castro scored from first on Victor Reyes’ double when catcher Christian Bethancourt couldn’t handle the relay from shortstop Taylor Walls.

Hill left to loud cheers in the sixth with two out and a runner on second.

The Tigers put the game away with a five-run seventh. Jonathan Schoop made it 3-1 with a sacrifice fly, ending McClanahan’s night, and Harold Castro added an RBI single off Jimmy Yacabonis. With two out, Yacabonis hit Riley Greene and Baez hit a two-run double to left.

Miguel Cabrera then lined an RBI double to right — his 3,075th hit — before receiving a standing ovation as he was replaced by pinch-runner Akil Baddoo.

Chang moved from third base to the mound in the eighth, making his major league pitching debut. He retired Willi Castro on what the scoreboard called a 40-mph curveball, but Schoop hit the next pitch for a two-run homer.

The game started about 20 minutes late because of the ceremony to honor Whitaker, whose name and number are now displayed in right-center field, just to the right of long-time double-play partner Alan Trammell’s #3.

“For four years, I’ve felt uncomfortable,” Trammell said during the ceremony. “It has been an honor to have my number retired, but there’s no No. 3 on the wall without No. 1.”

A LITTLE HELP FROM A FRIEND

The Tigers pulled off an ultra-rare 3-9 putout in the fourth inning. Siri lifted a foul pop-up down the right-field line, and first baseman Harold Castro juggled the ball while attempting an over-the-shoulder catch. Castro couldn’t hold on, but right fielder Willi Castro snared the ball before it hit the ground.

The teams finish their four-game series on Sunday, with Matt Manning (0-0, 3.46) pitching for Detroit against an unannounced Rays starter.