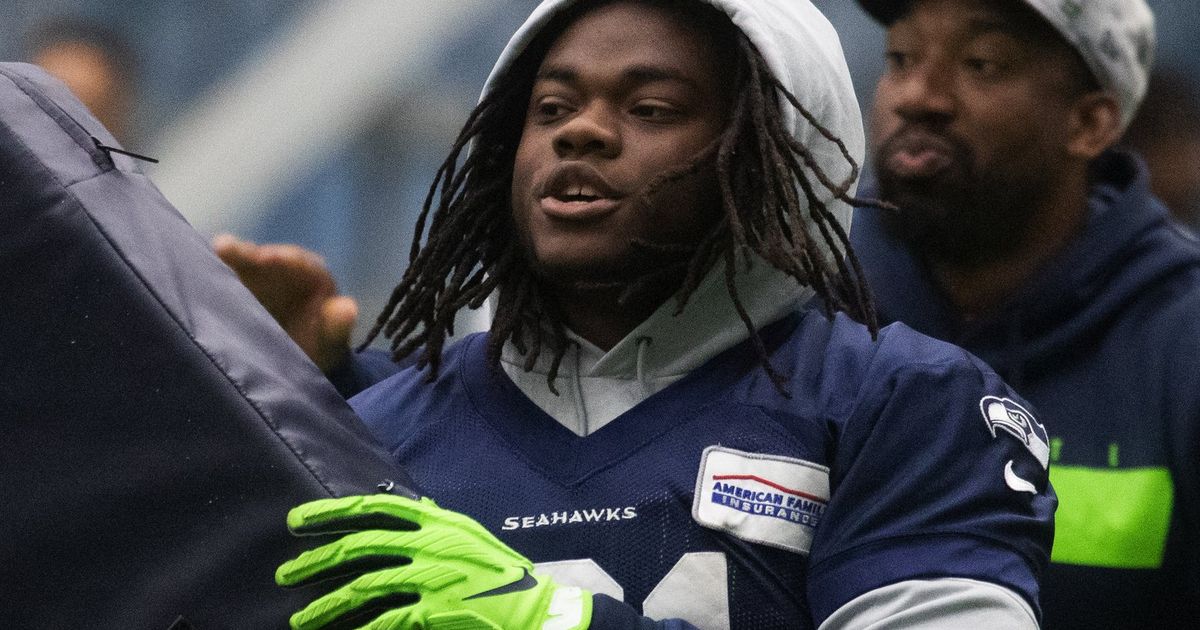 RENTON — The Seahawks’ sixth practice of training camp was one that could be judged almost more by what was felt and heard as much as what could be seen.

In the second practice in shoulder pads and hitting, Seattle emphasized running and short-yardage situations while also mixing in the usual passing sessions.

The one constant was hitting.

“That was a point of emphasis coming in,” said linebacker Uchenna Nwosu. “The offense, they won yesterday. So we felt like today, defensively, we had to get a little revenge. So we made a point to come out here and be physical today.”

The defense undoubtedly was.

But in what might be the kind of practices the coaches call perfect, it was hard to see if the offense or defense had the upper hand in the end as each made their share of big plays.

The hitting — and now that camp is a week old — also led to some tempers flaring.

In what was the most significant tussle of camp, running back DeeJay Dallas was escorted off the field late in practice after rushing in to defend his offensive teammate Travis Homer, who he also played with at the University of Miami, after Homer took a hard shot from Bubba Bolden. Interestingly, Bolden also played at Miami, though he didn’t arrive until after Homer’s final season there in 2018.

The hit was unquestionably hard but also appeared clean. Still, Dallas raced down the field to get at Bolden, which led to other teammates entering the fray and a big scrum developing. Coaches quickly regained control. But Dallas was then led off the field, with practice already nearing its end.

Dallas had played well until then, scoring a TD on a 26-yard pass from Lock and then also scoring a TD on a 36-yard run on which he outraced Bolden to the end zone with Dallas tossing the ball his direction after he scored.

That pass was one of several nice throws Lock, who again worked exclusively behind the second team offensive line with Geno Smith again running the first team, had on the day, including about a 40-yarder early on to rookie Bo Melton.

But Smith had his share, as well, including a crossing pattern early on to Tyler Lockett for about a 30-yard gain and then later in practice about a 25-yard gain on a fade route to DK Metcalf, who was closely guarded by rookie Tariq Woolen. Woolen got ample work with the first team defense at right cornerback with Artie Burns getting a day off, alternating throughout with fellow rookie Coby Bryant.

But if the coverage by Woolen was good, the throw and catch were better on a day when the offense turned in its most big plays in the passing game as has been seen all camp.

Smith and Lock, however, also each threw interceptions, though each came with something of an asterisk.

Smith threw a pick after he was whistled as down via sack but then decided to throw the ball anyway to the sideline in the direction of Metcalf. Bryant stepped in front of the errant pass for the pick.

Lock later had an interception on a go route when he threw to the outside of receiver Marquise Goodwin, with Goodwin appearing to expect the ball on the inside. The pass instead went straight to cornerback Michael Jackson.

But capping what might have been the best practice all camp for the offense, Smith finished it off with three straight completions in a third down drill that all went for first downs — two to Lockett and another to Metcalf, all against coverage from Bryant.

The Seahawks have Thursday off before turning to practice Friday and then holding their mock game Saturday at Lumen Field.

By the sound of things Wednesday, the day of rest will be much appreciated.