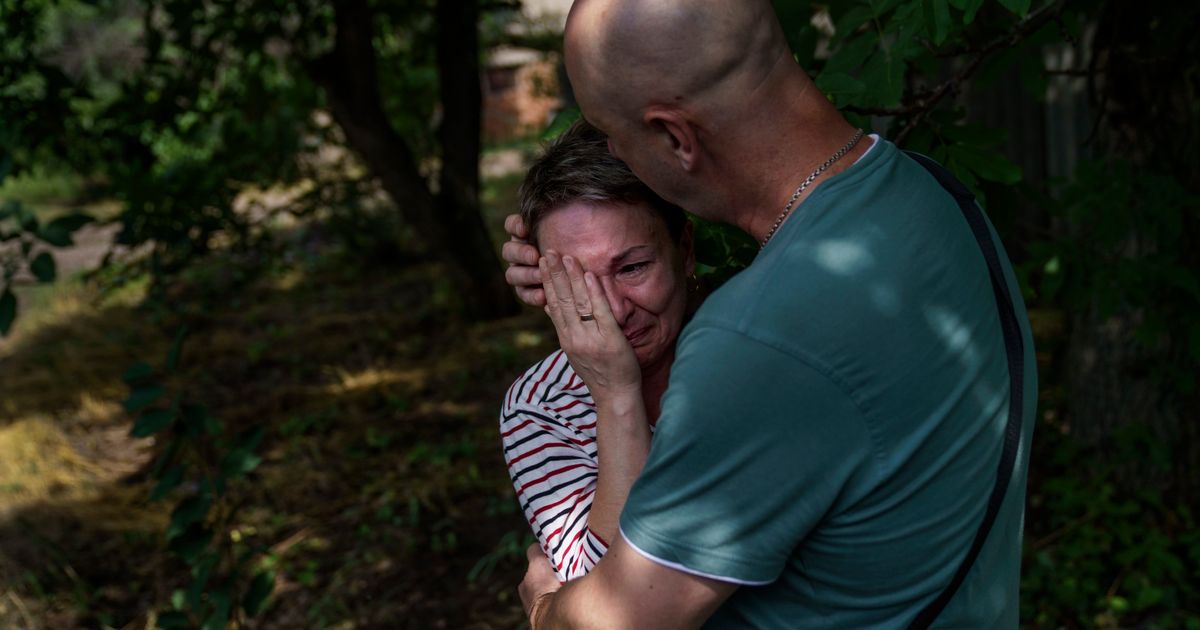 KRAMATORSK, Ukraine (AP) — Maryna Havrysh struggled to hold back her tears as she helped a group of volunteers load her elderly parents into an evacuation van in Kramatorsk, near the front line of Russia’s war on Ukraine.

Her 84-year-old father, Viktor Mariukha, was carried by stretcher out of the house, while her mother Lidia, 79, held a cane as volunteers held her under each arm.

As the couple left the home they had shared for nearly 70 years to begin a journey to a care home in western Ukraine, their daughter offered them words of comfort.

But when the van’s sliding door closed, Maryna burst into sobs.

“I understand that this will be the last time that I ever see them,” said Maryna, who decided to remain in Kramatorsk with her husband to continue working. “You see their age, I can’t give them the proper care.”

The evacuation of Maryna’s parents, carried out by volunteers with a Ukrainian aid group, came days after President Volodymyr Zelenskyy issued an order to all those remaining in the country’s embattled Donetsk region to evacuate as soon as possible as Russian forces press deeper into the region.

“The more people leave Donetsk region now, the fewer people the Russian army will have time to kill,” Zelenskyy said.

Even as the August weather remains warm in eastern Ukraine, authorities are also preparing for the cold months of fall and winter, when they fear that many of the roughly 350,000 residents still inside Donetsk may not have access to heating or electricity, or even clean water.

On Tuesday, Ukraine’s Deputy Prime Minister, Iryna Vereshchuk, said that a train carrying evacuees from Donetsk had arrived that day in central Ukraine, representing the start of what authorities are describing as a compulsory evacuation effort that would take 200,000-220,000 out of the province by fall.

On the outskirts of Kramatorsk, which has undergone frequent Russian shelling, volunteers have set up a collection point for gathering evacuees who are then transported to the nearest working train station in Pokrovsk, 50 miles (85 kilometers) to the southwest.

As she struggled to board the van bound for the train station, Valentyna Abramanovska, 87, carried only a black-and-white photograph of her mother and sister taken nearly 50 years ago on the Sea of Azov, a memento of her life to carry with her.

“God help me, God help me,” she repeated as she crossed herself with trembling hands. “I think I’m going crazy.”

Abramanovska said she’d been terrified after the bombings in her village became “a nightmare,” and was persuaded by her daughter to leave.

She still has childhood memories, she said, of German soldiers who occupied Ukraine during World War II. But for her, the experience of Russian bombardment has been far worse.

“They are beasts, jackals. God forgive me for what I’m saying,” she said. “How is it possible? They are killing children.”

While the government’s order to evacuate has convinced some of those left in the Donetsk region to flee, others are resistant.

Nina Grandova’s third-floor apartment in Kramatorsk was damaged by Russian shelling in July, and her disabled husband, Yurii, has been living in the building’s dingy basement since the Russian invasion began on Feb. 24.

Yet she said they have no plans to leave, and has been collecting firewood in the yard of her building to cook over in winter.

She is willing to sign a document required by authorities declaring that those who stay take responsibility for their own lives, she said.

“I have nowhere to go, I have to take care of my husband,” she said. “What will happen will happen.”

After being transported to the train station in Pokrovsk, hundreds of evacuees climbed onto the sweltering train ahead of a several hours’ journey west to the city of Dnipro.

Standing on the platform with her young daughter, Viktoria, a young mother from the eastern city of Bakhmut, said the danger posed by shelling and the prospect of a winter without heating had convinced her to flee.

“We already have problems with electricity and no gas, so I think families with children will be the first to leave,” she said.

Moments before the train lurched into motion and toward the west, an air raid siren pierced the air.