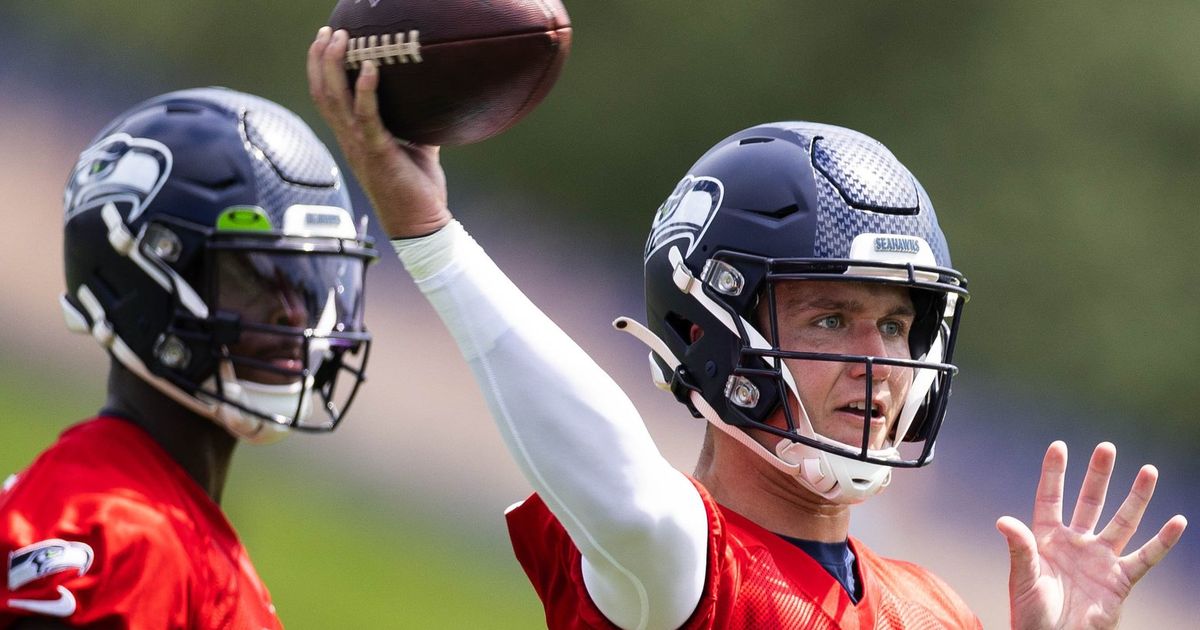 RENTON — So, Seahawks offensive coordinator Shane Waldron was asked Tuesday when he met the media for the first time during training camp, do you have a deadline naming a starting quarterback?

“Denver,” he said with a smile, referring to the regular-season opener Sept. 12 against Russell Wilson and the Broncos. After a pause he added, “We do have a plan though.”

A plan, he said, that will be kept in house.

And while Waldron was joking, staying consistent with the overall tenor of coach Pete Carroll of being as vague as possible about where things stand with the QB competition, Seattle’s fifth training camp practice of the season Tuesday did nothing to dissuade the idea it will take a while to decide on a starter between Geno Smith and Drew Lock.

In the team’s first padded practice, the offense had a better day than Monday, when the defense turned in a fair impression of the 2013 Legion of Boom team in its dominance.

Both quarterbacks spoke to the media after Monday’s practice and acknowledged candidly it was a tough day for the offense with Smith saying it was now “about how we respond.”

There were, at least, a few offensive highlights in the team’s response Tuesday, with Smith throwing two touchdowns during 11-on-11 team sessions and Lock three.

After extensive third-down and red-zone sessions, the practice ended with each quarterback getting two non-situational drives.

Smith’s first possession ended on the second play in an interception by Josh Jones, in on the play as a third safety along with Jamal Adams and Quandre Diggs, when Smith tried to throw it to Lockett in double coverage.

Lock then led a drive that ended in a third-and-9 TD pass to Penny Hart. Smith responded on his next drive with a short TD pass to Marquise Goodwin, who made a diving, juggling grab, finally pinning the ball between his feet for the score (though defenders argued, possibly correctly, that the ball hit the ground first).

Lock then led a short drive that ended in a 6-yard TD pass to former Husky Aaron Fuller on third-and-goal.

For camp, Smith now has thrown three interceptions in 11-on-11 sessions while Lock doesn’t have any.

As noted, Smith has gone exclusively against the starting defense, and Lock the backups.

Still, curtailing turnovers was considered among Lock’s biggest needs for improvement, so that he has largely taken care of the ball so far is a positive.

Waldron noted that the first practice of camp ended with Lock rolling to his left and trying to heave a pass deep across the field for what could easily have been an interception and that “he comes right back the next day almost has the identical situation right there, he sees it downfield as that’s probably a tough one, puts the ball away and runs with it. It’s just consistently making those quality decisions.”

So, who has the edge? Coaches aren’t saying. For now, that Smith continues to work with the ones indicates that if the team played a game today, he’d be the guy.

But as Waldron made clear, Seattle doesn’t play for almost six weeks, and lots can change.

Waldron also said not to assume that what fans and media see in open practices and preseason games is all that will win the job.

Asked why Smith has gotten almost all the work with the ones, Waldron noted that there is a lot of other work going on behind the scenes.

“There’s also a lot of different things with walk-throughs and everything we’ve got going,” Waldron said. “And there have been a few scenarios out here where there has been some overlap. And so we’re just going with our plan here, really evaluating those guys, evaluating everything they’re doing.“

Waldron noted that factors such as “the communication, how they’re interacting with their teammates, how we’re throwing individual routes, how we’re running the drill periods,” will also play a role in the decision.

But ultimately, Waldron said, the major determiner is “winning. … Every situation that they are in, are they winning that moment?”

The first significant moment figures to come Saturday when the team holds its annual mock game at Lumen Field at 2:30 p.m. And the most telling moment of that game could be if Lock gets some work behind the one offensive line against the No. 1 defense, or if the split continues to be as it has so far.

Carroll has said several times that Smith has the upper hand due to his better knowledge of the offense, having been with Seattle four years now and in his second year with Waldron, while Lock arrived in March from Denver in the Wilson deal.

But Waldron indicated that’s becoming less of a factor. He praised the help Smith and Jacob Eason, who has been with the Seahawks since October, have done to aid Lock in learning the playbook saying “they’re really helping each out and that’s allowed Drew to really pick up the offense in a good, timely fashion.”