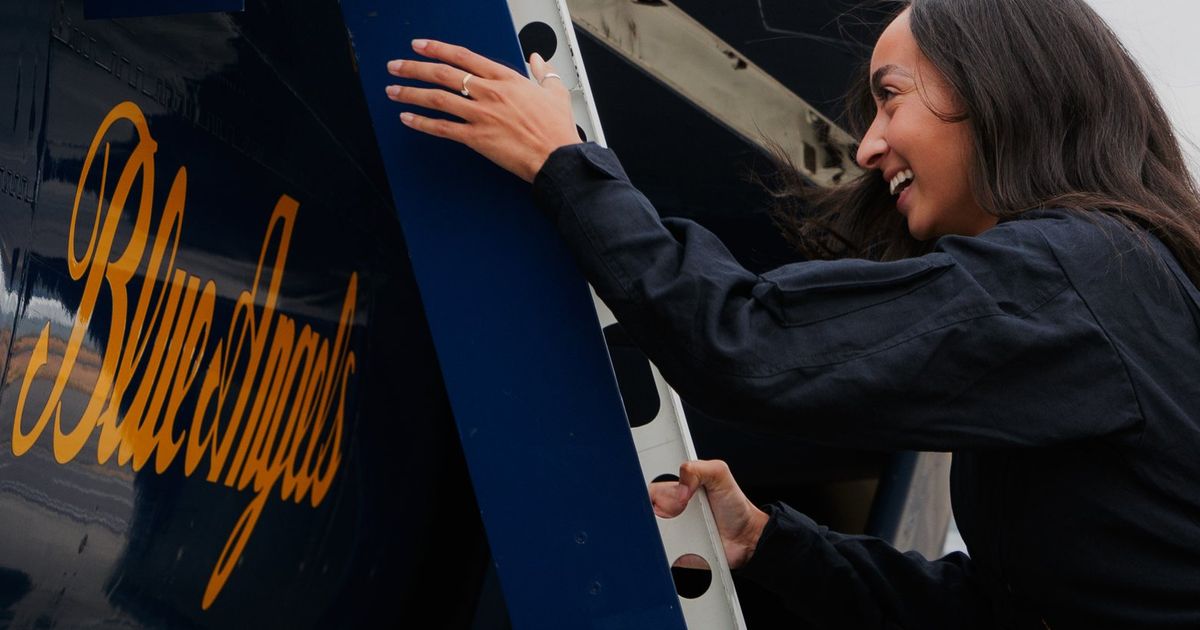 Seated in the backseat of a Blue Angel F/A-18 Super Hornet, I hear a message buzz through my headphones: “Alriiighty.”

In an instant, the jet shoots forward and catapults into the sky following a 45-degree angle, reaching a few thousand feet faster than someone could read this sentence.

The landscape rapidly materializes and expands below, like the Puget Sound area is a carpet, the plane’s sudden acceleration unrolling the familiar blues and greens below.

Just as quickly, we’re above the clouds, and baby blue skies peppered with the caps of the Cascades stretch for miles.

“Reeeady,” crackles Lt. Griffin “Pushpop” Stangel in my ears. “Hit it,” he says, signaling the start of the rolls, loops and turns that effortlessly exhibit G-force.

As a prelude to the weekend’s Seafair Weekend Festival, the Blue Angels hosted a few rides as part of their “key influencer” program. Key influencers are those who help shape attitudes and opinions of youth in their communities; they may be a teacher, public figure, media member or an expert in their field.

“You get to meet so many great people in this job,” said Stangel, the No. 7 pilot and narrator for the Blue Angels. “But the ones who are doing great work that we’re able to recognize is very rewarding.”

This year, the Blue Angels gave Mercer Island High School teacher Jen McLellan and I our ride-along wings, and I couldn’t have been more honored (and nervous and thrilled).

As you’re reading this, you’re likely experiencing 1G of G-force — the “neutral” force on our bodies when upright on Earth. We don’t really feel it unless braking hard in a car or momentarily in an elevator. Our bodies have adapted to Earth’s gravitational force — (and our bodies even compensate for the difference of blood pressure in our lower extremities compared to, say, our heads — ), but during those rolls, loops and turns going 600 mph in a jet? Not so much.

With our first maneuver of two quick rolls to the left (aka Aileron Rolls), we only pull 2 or 3Gs, or two or three times the “neutral” 1G gravitational force. If you weigh 200 pounds, you would (very briefly!) feel between 400 to 600 pounds of force on your body. I say only 2 or 3Gs because this feels similar to the dips and turns of a roller coaster — no tunnel vision or blacking out yet.

Next up is a Split S, a maneuver typically executed to evade combat while being chased by an enemy plane. “Get ready to get that squeeze going!,” Stangel says, prompting me to start the prescribed technique to keep my blood in my brain. (If you wants to try it at home: While squeezing your lower body muscles, take a deep breath in, hold for three seconds, force some air out of your lungs in a quick burst — it’ll sound like you’re squeezing out the letter K — take a small sip of air in, rinse and repeat.)

If you don’t follow this technique, your chest will be too heavy to expand for a full breath of air and gravity will try to pull the blood from your upper extremities to the bottom of your feet, far away from your brain, which needs the blood for oxygen — you’ll pass out. This is called G-LOC, or G-force induced loss of consciousness (and while flying a jet, it can be fatal).

The F/A-18 suddenly rolls upside down and the Split S begins, the force of four times my body weight crushing down on me in a swooping, sickening, descending half-loop. A trail of condensation marks the jet’s curved path behind us. My body feels like it’s being firmly pushed and pulled back, over and into the seat. I can’t stop smiling, but maybe it’s just gravity stretching my skin.

With time for one last maneuver, we speed up to 350 knots (about 400 mph) and initiate a level 360-degree mid-radius turn across the horizon, pulling 7Gs. I make the mistake of ignoring my neck as I brace everything else in my body. Feeling like it weighs about 80 pounds, my head drops into my lap under almost 800 pounds of force. No matter how hard I try, there’s no lifting my bowling-ball-cement-block head.

With my neck muscles straining and my head now attached to my lap, I have to stop trying to sit up and start doing my breathing exercises so I don’t pass out. Meanwhile, my pilot is experiencing the exact same gravitational force, but he’s talking and flying the plane (like he does this every day or something).

We drop to 5Gs and complete the rotation, and my head floats up like a feather. I didn’t pass out or throw up, and as Stangel noted, “I heard you workin’ that whole time!”

(He later told me it would have been impossible to lift my head up. That made me feel better, although my neck will be sore for days thanks to my valiant efforts.)

The limit for an F/A-18 Super Hornet is 7.5Gs, just a half-G higher than the last maneuver we pulled. If you’ve seen “Top Gun,” those 10G maneuvers are impossible for an F/A-18. If the Blue Angels pulled 10Gs, says Crew Chief Sean Donoghue, “the plane would look like a banana.”

Back on the ground before the flight, Donoghue had prepped McLellan and I for our flights with a safety briefing and a fitting of navy blue flight suits embroidered “Blue Angels VIP.”

As Mercer Island School District’s career and technical education director and a teacher since 1991, McLellan plans to take this experience back to her students, whether she incorporates it into her lesson plans or shares the ride as inspiration.

“My personal philosophy in life is to say yes to everything. It has led to so many amazing experiences that were scary — and sometimes I didn’t always feel super prepared — but they challenged me and led me places that have been extraordinary,” McLellan said.

“Every little step out of your comfort zone leads you to places that you never would have dreamed of.”

McLellan hopes to inspire her students to be brave and step out of their comfort zones, just as she did riding those aerial loops and spins on her flight (and she even hit 7.3Gs!).

Whether you’re in the cockpit or watching the Blue Angels soar by from below, the jets provide a captivating experience. Listen for their roar and look up into the sky on Friday, Saturday and Sunday at 3:05 p.m. over Lake Washington.

The Golden Knights, the U.S. Army parachute team, will also perform at about 11 a.m. on all three days.

The Interstate 90 floating bridge will remain open throughout all performances.