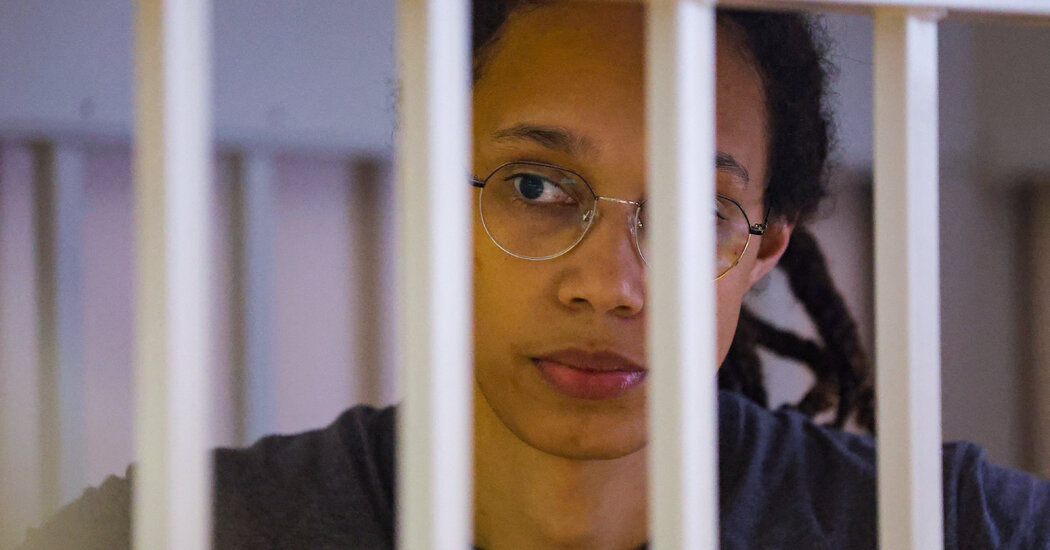 (Want to get this newsletter in your inbox? Here’s the sign-up.)

Good evening. Here’s the latest at the end of Thursday.

President Biden called the sentence “unacceptable,” saying it was “one more reminder of what the world already knew: Russia is wrongfully detaining Brittney.”

They accused the four current and former police officers in Louisville, Ky., of several crimes, including lying to obtain a warrant that was used to search Taylor’s home.

In March 2020, officers knocked down Taylor’s door and fired gunshots after her boyfriend, believing they were intruders, shot an officer in the leg. Two officers shot and killed Taylor, a 26-year-old emergency-room technician.

The officers who shot Taylor are not named in the new indictments. The charges instead name three officers who were part of an investigative unit that obtained the search warrant for the raid, and a fourth who was dismissed because, officials said, he fired blindly into the apartment.

3. Chinese missiles struck the seas surrounding Taiwan less than a day after Speaker Nancy Pelosi celebrated the island as a defender of democracy next to autocratic China.

China called the exercises a prelude to a bigger show of force intended to punish Taiwan for the visit. The drills, expected to run for 72 hours, also give Chinese forces practice should they ever be ordered to attack the island.

The strikes are putting the region on edge. Five missiles landed in Japan’s exclusive economic zone, the first time any had landed in those waters, prompting sharp protests from the Japanese government.

4. The jury in the defamation case against Alex Jones awarded $4.1 million in damages.

The jury returned to court after deliberating for less than a day in the trial of Jones, the Infowars conspiracy theorist, which was brought by the parents of a child killed in the 2012 mass shooting at Sandy Hook Elementary School. Follow along for live coverage.

The most dramatic moment of the trial came on Wednesday, when a lawyer for the parents revealed in court that he had received text messages from Jones’s cellphone, apparently sent in error by his legal team to the lawyer, showing that Jones had withheld key evidence.

The lawyer for the families said today that he planned to turn over two years of text messages from Jones’s phone to the House committee investigating the Jan. 6 attack on the Capitol, unless a judge instructed him otherwise.

5. Gov. Ron DeSantis suspended a prosecutor who vowed not to criminalize abortion.

In June, Andrew Warren, the elected state attorney of Hillsborough County, which includes Tampa, was among 90 prosecutors nationwide who vowed not to prosecute those who seek or provide abortions after the Supreme Court overturned Roe v. Wade.

6. Hunger in America is rising. So is the cost of feeding the hungry.

The recent increase in food insecurity is being spurred by inflation. According to the most recent report on consumer prices, the cost of food increased 10.4 percent from a year earlier, the largest 12-month increase since 1981.

Food banks are trying to meet their communities’ needs while coping with dwindling donations and increased awareness that they are an option. The director of one food bank in Utah said that the people she sees are working but not making enough money, and she repeatedly hears: “‘I’ve never had to use a food pantry. I’m the one who’s helped people, not the one who needed help.’”

7. A heat wave that has blanketed the U.S. will peak in the Northeast.

Temperatures described as “oppressive” in National Weather Service forecasts may reach record-breaking highs in the mid-to-high 90s across the region, with heat indexes over 100 degrees.

And as peak hurricane season gets underway, federal scientists predict a 60 percent chance of an “above normal” season. It could bring 14 to 20 named storms, of which six to 10 could turn into hurricanes, which include sustained winds of at least 74 miles per hour.

8. The U.S. declared the growing monkeypox outbreak a national emergency.

The president and the health secretary have been under intense pressure to move more aggressively to combat the outbreak, especially as supplies of the monkeypox vaccine have been severely constrained.

The declaration gives federal agencies the power to invest in vaccines and drugs, to access emergency funding and to hire additional workers to help manage the outbreak, which began in May.

As of Wednesday, the U.S. had recorded nearly 7,000 monkeypox cases, with the highest rates per capita in Washington, New York and Georgia. More than 99 percent of the cases are among men who have sex with men.

Related: Here’s how experts are thinking about the monkeypox outbreak. And here’s what to know about polio after a recent case turned up in a New York suburb.

9. Here’s why you should try crevice gardening.

It’s as simple as it sounds: place small and bare-root plants in the crevices between rocks. But this is not your grandmother’s rock garden. It’s heavier on the stones, which cover at least half of the garden’s surface area, and it can range from naturalistic to high modernist art.

In a world where water is increasingly scarce, one horticulturist says rock gardening — an extreme design inspired by dramatic, impossible places — is “the future.”

It can be expensive if you have to buy the rock and ship it in, but the care required of resilient crevice gardening is minimal compared with traditional garden beds.

10. And finally, the latest stunning snapshot from space.

NASA this week published new images captured by the James Webb Space Telescope, the most powerful space observatory ever built. Five unforgettable scenes the telescope recorded — the deepest and sharpest infrared images of the universe yet — were unveiled in July.