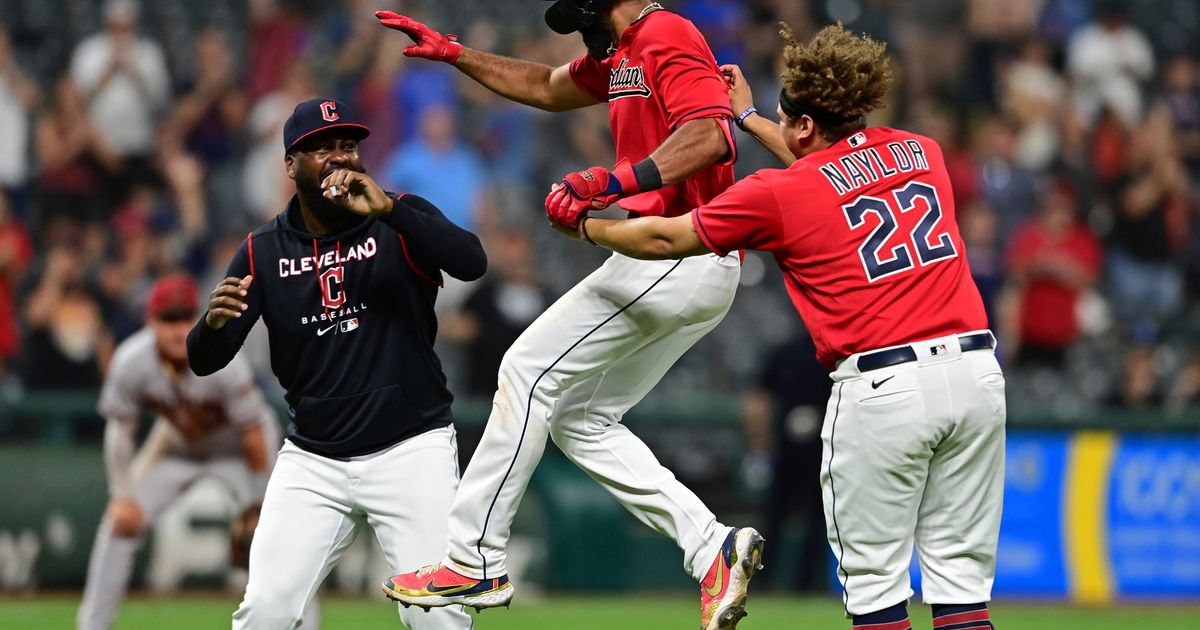 CLEVELAND (AP) — Amed Rosario homered early and singled in the winning run in the 11th inning for his third hit of the game as the Cleveland Guardians beat the Arizona Diamondbacks 6-5 on Monday night.

Rosario hit a line drive past a diving Christian Walker at first base and into right field to score rookie Will Benson from third, setting off a celebration behind the mound.

Rosario, who launched a two-run homer in the first, lined a 1-0 pitch from Mark Melancon (3-10), the Diamondbacks’ 10th pitcher. Will Benson began the inning as the automatic runner at second and moved to third on Austin Hedges’ bunt.

Steven Kwan walked and stole second, but Myles Straw grounded out before Rosario gave Cleveland its fifth walk-off win of the season.

Arizona advanced a runner to third with one out in the 11th, but Sam Hentges (3-2) retired Jake McCarthy on a line drive to second baseman Andrés Giménez, and pinch-hitter Buddy Kennedy struck out.

Arizona pushed across the go-ahead run in the 10th when Ketel Marte hit into a double play, but Giménez tied it with an RBI single.

The ball was flying out of Progressive Field early on an 84-degree night. Daulton Varsho’s solo home run put Arizona ahead in the second, but Owen Miller’s two-run homer gave Cleveland the lead in the bottom of the inning.

Rosario hit a two-run homer in the third, but Walker’s three-run shot in the fourth off Cal Quantrill erased a 4-1 deficit.

Zach Davies allowed both home runs in his first start since June 25. The right-hander was on the injured list with shoulder inflammation and was activated before the game. Davies was pulled after Rosario’s home run in the third and charged with four runs.

Kwan, who had two hits to extend his hitting streak to 15 games, singled with one out in the ninth. Ian Kennedy struck out Rosario and retired José Ramírez on a fly ball.

Arizona reliever Kevin Ginkel, selected from Triple-A Reno on Monday, struck out the side in the fourth and missed an immaculate inning by one pitch. Nolan Jones and Hedges each struck out on three pitches. Straw fouled off an 0-2 pitch before taking a called strike three.

Guardians first baseman Josh Naylor returned after missing two games because of numbness in his surgically repaired right ankle. He tested his ankle and was cleared by the team’s medical staff to play Monday. Naylor has also been dealing with a sore back.

“He went out and ran and did everything,” manager Terry Francona said. “I told him, ‘I want you to play, you’ve got to be OK’d.’ So, they did OK it.”

Benson was in line at a restaurant in Louisville, Kentucky, on Sunday when he got a phone call informing him he was being promoted to Cleveland from Triple-A Columbus.

“I was in Taco Bell because my girl wanted Taco Bell,” Benson said. “But it all worked out perfect because the Taco Bell was pretty close to the Omni hotel where my parents were staying so I was able to drive back and tell my parents. It was crazy. We literally went crazy in valet, just jumping around, screaming.”

Benson made his major league debut in right field in the ninth inning.

Diamondbacks: LHP Caleb Smith was placed on the 15-day injured list with a fracture of his non-pitching hand. The injury occurred after he was removed from Saturday’s game against Atlanta. “Caleb broke his hand by punching something that he shouldn’t have been punching,” manager Torey Lovullo said.

Guardians: Miller was removed from Saturday’s game after being hit on the right elbow by a pitch and didn’t play Sunday.

Guardians: RHP Triston McKenzie (7-7, 3.24 ERA) gave up a three-run homer to Xander Bogaerts and lost to the Red Sox on Thursday.