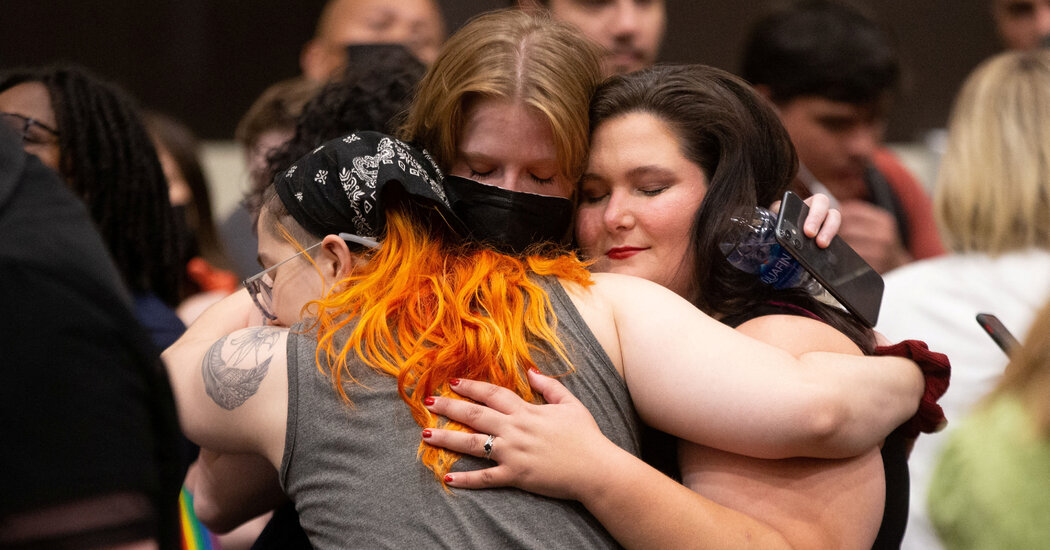 The right to an abortion is protected in the Kansas State Constitution and on Tuesday, a decisive majority of voters kept it there. Fifty-nine percent of Kansans who went to the polls voted to reject a constitutional amendment that would have opened the door to full abortion bans of the kind that exist in neighboring states like Missouri and Oklahoma.

What makes this all the more striking is the fact that Kansas is one of the most reliably Republican states in the country. Donald Trump won in the 2020 presidential election with more than 56 percent of the vote. Three of its four representatives in the House are Republicans and its two Republican senators, Jerry Moran and Roger Marshall, are among the most conservative in the Senate.

Anti-abortion activists were confident they would succeed. They’ve taken, instead, a devastating blow to their project.

It is hard to overstate the significance of this defeat. The vote in Kansas is the first time abortion has been on the ballot since the Supreme Court’s ruling in Dobbs v. Jackson Women’s Health, which overturned Roe v. Wade. It’s the first time any voters have had the chance to weigh in on new abortion restrictions, and the result is a stunning victory for Kansans, and Americans, who believe that the right to an abortion is an inextricable part of our liberty under the Constitution.

If it isn’t already obvious that Dobbs has unsettled American politics, the vote in Kansas makes it clear. Republicans may still win the House, and even the Senate, in November. But the sheer unpopularity of abortion bans — as well as the monstrous consequences for women in states that have banned abortion — is a heavy weight around the neck of the entire Republican Party.

The task, for the national Democratic Party, is to make that weight even heavier. And for this, they have the model of Kansas, where pro-choice activists went on the offensive against restrictionists. They drew a sharp contrast between their aims and those of their opponents and made abortion rights a live issue for voters.

Republicans do not want to fight on this turf — see the immediate campaign to downplay the impact of Dobbs in the wake of the ruling — which is all the more reason for Democrats to make them do it.

I didn’t have a column this week! I did do other things, however. I joined the Left Anchor podcast at The American Prospect (my journalistic alma mater) to discuss the Supreme Court, the Constitution and how to take both back from the political right.

I also recorded a short video for the Criterion Channel in which I explored the career of the late, great actor Yaphet Kotto.

Annie Lowrey on pregnancy and motherhood for The Atlantic.

A 1978 interview with screenwriter-director Paul Schrader on his debut film, “Blue Collar.”

Gaby Del Valle on “environmental nativism” for The Nation magazine.

Monica Potts on Republicans and same-sex marriage for FiveThirtyEight.

The transcript of Vin Scully’s radio call of the ninth inning of Sandy Koufax’s 1965 perfect game against the Chicago Cubs.

I am a huge fan of the Beastie Boys, and so when I saw this mural the last time I was in New York, I had to take a picture.

My son has become something of an ice cream connoisseur, and frequently requests different flavors of ice cream to make at home. This week, we made strawberry ice cream using a recipe from David Lebovitz’s book, “The Perfect Scoop.” Here’s the recipe and, fair warning, you’ll need an ice cream maker for this.

Slice the strawberries and toss them in a bowl with the sugar and vodka, stirring until the sugar begins to dissolve. Cover and let stand at room temperature for one hour, stirring every so often.

Pulse the strawberries and their liquid with the sour cream, heavy cream and lemon juice in a blender or food processor until almost smooth, but still slightly chunky.

Refrigerate for an hour, then freeze in your ice cream maker according to the manufacturer’s instructions.