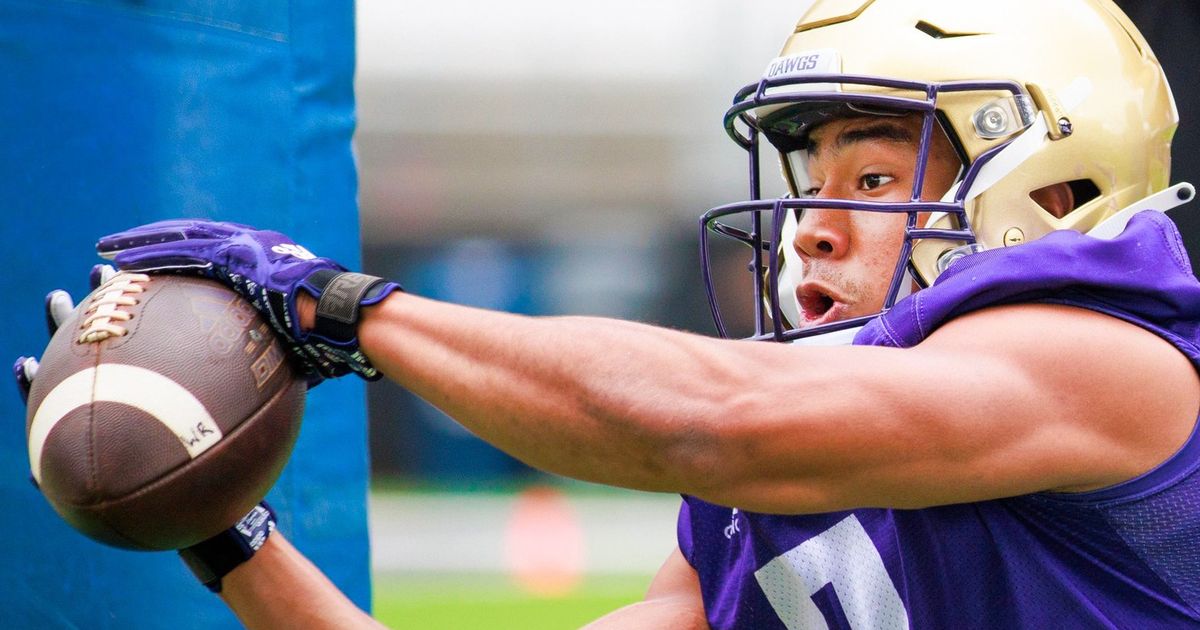 Even further, in fact, than his coaches can fathom.

“Two-thousand miles!” UW associate head coach JaMarcus Shephard shouted Thursday, with a gravelly tenor and a toothy grin, while his graduate student running back stretched inside Husky Stadium. “Two-thousand miles! I hope you didn’t come for nothing, Wayne!”

In UW’s first practice of preseason camp, Taulapapa — who transferred from Virginia to UW this offseason — immediately assumed a starting spot. He took repeated reps with quarterback Michael Penix Jr. (another transfer) and bounded through blocks provided by the Huskies’ first-team offensive line.

Taulapapa, of course, arrives at UW with considerable credentials — including 1,192 rushing yards and 20 touchdowns in four seasons at Virginia and a player-voted captaincy in 2021.

But it might be the Hawaiian bruiser’s selflessness that most impresses the Huskies’ head coach.

“There’s other roles that are so significant that a running back body type brings, especially in special teams,” first-year UW coach Kalen DeBoer said Thursday. “One of the cool things, I remember Wayne on his visit here just really talking about how important it is for him to be on special teams and asking and seeking that out. It’s important to these guys, because they also understand that’s a big part of them moving on to the next level. Those are the goals they have too, beyond playing here at UW.”

Newton and Davis are both active after missing the spring with injuries, though Newton will be limited for the next week or two as he works his way back from a torn ACL.

But it was Nixon — who caught just one pass as a wide receiver at Nebraska last fall — primarily working with the second team, behind Taulapapa.

“Will’s a special athlete,” DeBoer said of Nixon, who is listed as a hybrid running back/wide receiver but is working with the backs. “In high school he was a heavily regarded and recruited running back. His dad (Carolina Panthers assistant head coach Jeff Nixon) is a running backs coach in the NFL. He’s got a lot of understanding of what it takes to be at that position.

“His last year going to college at Nebraska, he was more of that receiver type. So he can catch the ball really well. He’s got a really diverse skill set. That’s what we want in the running back position. That’s what, when we really feel we’re at our best, we have. He brings that. He’s just a guy that will find his way onto the field, I think, because he’s so diverse in those areas and has so many things he can bring to the table.”

But how many others will find the field? When asked how many running backs can realistically rotate, DeBoer said it’s possible with three “but I think it’s easiest when it’s two.”

But it’s up to each of the seven scholarship running backs to prove they didn’t come to UW for nothing.

“I really thought that group looked different (today) — No. 1 in numbers, but No. 2 in the quality,” DeBoer said. “I think we’ve upgraded a lot there and it’s obviously going to be a very competitive group, because there’s a lot of guys that want to step on the field.”

It may not be ending any time soon.

Junior Michael Penix Jr., sophomore Dylan Morris and redshirt freshman Sam Huard are each competing to start inside Husky Stadium against Kent State on Sept. 3, and DeBoer said the quarterback trio will likely receive equal reps through the team’s scrimmage on Aug. 13. Penix was UW’s primary starter on Thursday, while Morris worked with the second team and Huard split occasional reps.

But when it comes to a decision timeline, DeBoer said essentially: TBD.

“I know everyone wants to know the timeline and things like that. We would love to make a decision as soon as possible,” he said. “But we also want to really make sure that we’re giving each guy the proper number of reps.

“We want to get through the install and have all those guys have the chance to run with the 1s on each day’s install. There’s four, five days of install that we have — when you talk about red zone and two-minute (drill), which we did very little of in the spring. So we’ll definitely keep rotating the guys.”

DeBoer added that on three occasions in the last 15 years or so, his quarterback competition has stretched into the season — with two players sharing reps in non-conference games. But, before you ring the anxiety alarm, he added that’s “not ideal. Not the way you want it to be.”

No, ideally UW will name a starter two weeks prior to the opener against Kent State. But Penix, Morris and Huard’s play will dictate the decision date.

“I think the No. 1 thing for us is just to coach these guys up as hard as we can,” DeBoer said. “(Offensive coordinator and quarterbacks coach Ryan) Grubb’s going to do an awesome job with that, and just me helping them through it. Because they all want it. They all want it really bad, and you can see that. I don’t want them to press. I want them to enjoy it. I want them to push, to be competitive. But I want them to just do what they do best and play their game.”