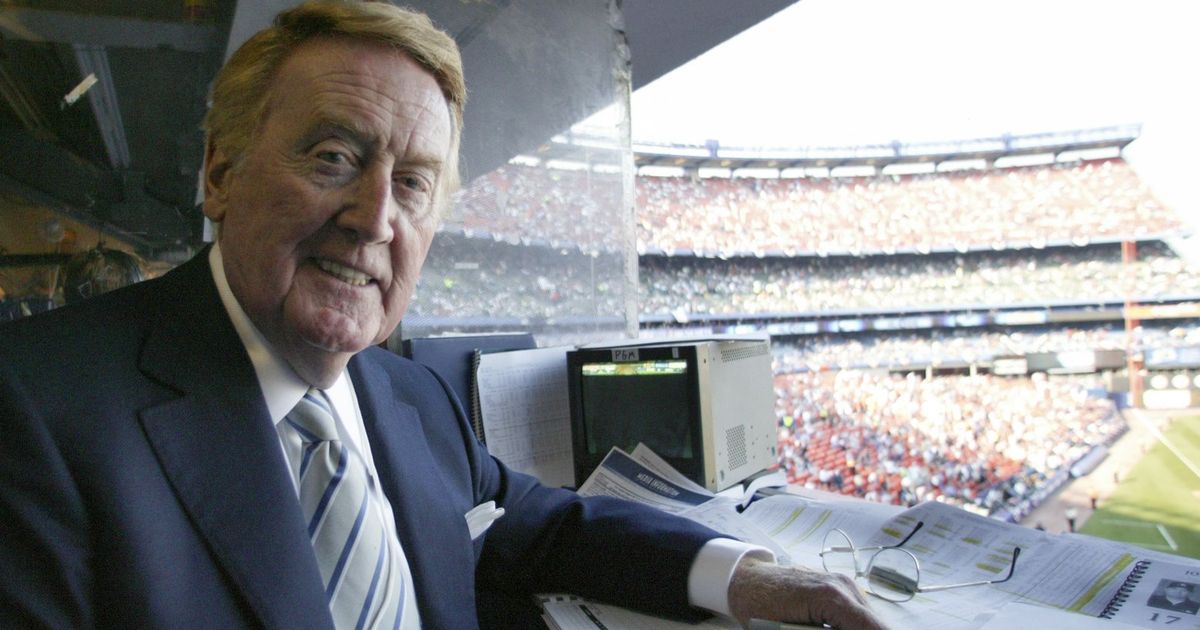 I got to meet Vin Scully at Petco Park once while I was working in San Diego. He was kind enough to give me 10 minutes for a story I was writing about then-Padres broadcaster Dick Enberg.

At the end of the interview I showed my appreciation to the Dodgers play-by-play man by saying, “Thank you, Mr. Scully.”

Scully died at age 94 on Tuesday, meaning the greatest sportscaster in history is no longer with us. The voice millions of Angelinos and I grew up listening to is now (hopefully) describing Walter Johnson staring down Babe Ruth.

I’ve long said that no figure in Los Angeles had a connection to the city quite like Scully. And not just because he was the poet laureate of his sport, but because he always felt like a friend — a man you knew simply as “Vin.”

Legend had it that an inning never came to an end if Scully was in the middle of a story. Could have been the tale of Braves outfielder Jonny Gomes’ encounter with a feral wolf, or of Giants pitcher Madison Bumgarner discovering a living rabbit inside of a snake he killed. Scully would dulcetly detail these adventures without missing a pitch, gripping fans just as much between action as he did during.

It was hard to listen to any other baseball broadcaster once you’d been exposed to Scully. I called the withdrawals Scully-osis. Nothing against any of the other play-by-play magicians, but nobody could so effortlessly entertain quite like Vinnie.

It wasn’t just his storytelling, though. It was his inimitable ability to capture baseball’s biggest moments — using his words to amplify the event but never overshadow it.

His description of the ninth inning of Sandy Koufax’s perfect game was a master class in suspense-building that ended with an impromptu pearl most sports writers would have killed to type.

“And Sandy Koufax, whose name will always remind you of strikeouts, did it with a flurry. He struck out the last six consecutive batters. So when he wrote his name in capital letters in the record books, that “K” stands out even more than the O-U-F-A-X.”

His handling of Kirk Gibson’s walkoff home run Game 1 of the 1988 World Series was equally artful. After the injured MVP socked a two-run shot over the right-field wall with two outs to give the Dodgers a 5-4 win, Scully stayed quiet for a full minute as the cheers of the crowd overtook the broadcast. Then came this gem: “In a year that has been so improbable, the impossible has happened!”

But my favorite Scully line is less well-known, and I confess I didn’t hear it live. It came after rookie Cy Young winner Fernando Valenzuela gutted out a complete-game victory in Game 3 of the 1981 World Series — in which he allowed four earned runs — to put the Dodgers up two games to one vs. the Yankees.

Said Vin after the win: “It wasn’t the best Fernando performance, but it was his finest.”

You knew deep down Scully bled blue, but fans would never get a whiff of his fandom on the broadcast. He was an archetype of old-school objectivity, as likely to criticize a Dodger as he was to praise one — and never one to complain about a questionable call or underplay an achievement by an opposing player.

His only slip-up on the impartiality front came when the Los Angeles Dodgers won their first pennant in 1959 and Scully beamed, “We go to Chicago!” He vowed to remove “we” from his on-air vocabulary from that day forward.

I’ll go ahead and use it here, though. We — whether it be Dodgers fans, baseball fans, sports fans, broadcasting fans, or fans of anyone kind, dignified and excellent — all loved Vin Scully. And the outpouring we’ve seen since his passing confirms the impact the irreplaceable wordsmith had on his admirers.

As journalist Rich Hammond tweeted: “If you’re not from L.A., you have to understand this: We can’t really agree on anything. It’s a ‘city’ that really is a bunch of regions loosely connected by clogged freeways. A random group of 25 locals will have trouble finding common ground on anything … except Vin Scully.

“I wrote a lot of stories over a lot of years, talked to a lot of good people who were generous with their time. I can recall only one writing an old-fashioned thank-you note the next day and mailing it to me. For 23 years it has been on the wall in my office at home. RIP, Vin.”

That’s the Scully I’ll remember. As a broadcaster, the best. As a man, the finest.


Matt Calkins:
mcalkins@seattletimes.com; on Twitter: @matt_calkins. Matt Calkins joined The Seattle Times in August 2015 as a sports columnist after three years at the San Diego Union Tribune. Never afraid to take a stand or go off the beaten path, Matt enjoys writing about the human condition every bit as much as walk-offs or buzzer-beaters. His mom reads the comments so take it easy on him.