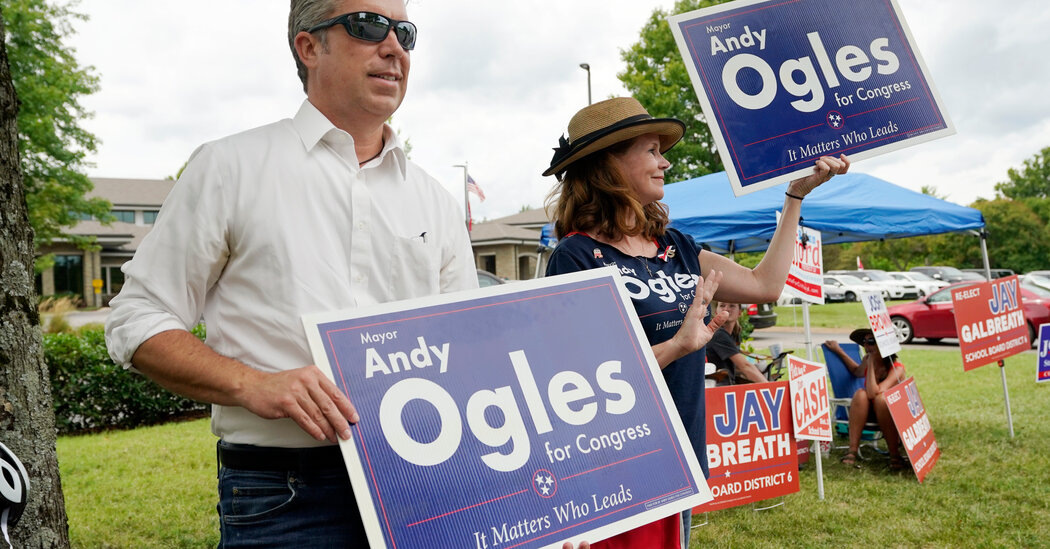 A decisive vote to defend abortion rights in deeply conservative Kansas reverberated across the midterm campaign landscape on Wednesday, galvanizing Democrats and underscoring for Republicans the risks of overreaching on one of the most emotionally charged matters in American politics.

The overwhelming defeat of a measure that would have removed abortion protections from the state constitution quickly emboldened Democrats to run more assertively on abortion rights and even to reclaim some of the language long deployed by conservatives against government overreach, using it to cast abortion bans as infringing on personal freedoms. (As of Wednesday, the margin was 58.8 percent to 41.2 percent.)

“The court practically dared women in this country to go to the ballot box to restore the right to choose,” President Biden said by video Wednesday, as he signed an executive order aimed at helping Americans cross state lines for abortions. “They don’t have a clue about the power of American women.”

In interviews, Senator Elizabeth Warren, Democrat of Massachusetts, urged Democrats to be “full-throated” in their support of abortion access, and Representative Sean Patrick Maloney, the chairman of the House Democratic campaign arm, said the Kansas vote offered a “preview of coming attractions” for Republicans. Representative Elissa Slotkin, a Michigan Democrat in a highly competitive district, issued a statement saying that abortion access “hits at the core of preserving personal freedom, and of ensuring that women, and not the government, can decide their own fate.”

Both Republicans and Democrats caution against conflating the results of an up-or-down ballot question with how Americans will vote in November, when they will be weighing a long list of issues, personalities and their views of Democratic control of Washington.

“Add in candidates and a much more robust conversation about lots of other issues, this single issue isn’t going to drive the full national narrative that the Democrats are hoping for,” said David Kochel, a veteran of Republican politics in nearby Iowa. Still, Mr. Kochel acknowledged the risks of Republicans’ overstepping, as social conservatives push for abortion bans with few exceptions that polls generally show to be unpopular.

“The base of the G.O.P. is definitely ahead of where the voters are in wanting to restrict abortion,” he said. “That’s the main lesson of Kansas.”

Polls have long shown most Americans support at least some abortion rights. But abortion opponents have been far more likely to let the issue determine their vote, leading to a passion gap between the two sides of the issue. Democrats hoped the Supreme Court decision this summer erasing the constitutional right to an abortion would change that, as Republican-led states rushed to enact new restrictions, and outright bans on the procedure took hold.

The Kansas vote was the most concrete evidence yet that a broad swath of voters — including some Republicans who still support their party in November — were ready to push back. Kansans voted down the amendment in Johnson County — home to the populous, moderate suburbs outside Kansas City — rejecting the measure with about 70 percent of the vote, a sign of the power of this issue in suburban battlegrounds nationwide. But the amendment was also defeated in more conservative counties, as abortion rights support outpaced Mr. Biden’s showing in 2020 nearly everywhere.

After months of struggling with their own disengaged if not demoralized base, Democratic strategists and officials hoped the results signaled a sort of awakening. They argued that abortion rights are a powerful part of the effort to cast Republicans as extremists and turn the 2022 elections into a choice between two parties, rather than a referendum just on Democrats.

“The Republicans who are running for office are quite open about their support for banning abortion,” said Senator Warren. “It’s critical that Democrats make equally clear that this is a key difference, and Democrats will stand up for letting the pregnant person make the decision, not the government.”

A Kansas-style referendum will be a rarity this election year, with only four other states expected to put abortion rights directly to voters in November with measures to amend their constitutions: California, Michigan, Vermont and Kentucky. However, the issue has already emerged as a defining debate in some key races, including in Michigan and Pennsylvania, where Democratic candidates for governor have cast themselves as bulwarks against far-reaching abortion restrictions or bans. On Tuesday, Michigan Republicans nominated Tudor Dixon, a former conservative commentator, for governor, who has opposed abortion in cases of rape and incest.

And in Pennsylvania, Doug Mastriano, the far-right Republican nominee for governor, said, “I don’t give a way for exceptions” when asked whether he believes in exceptions for rape, incest or the life of the mother. Governor’s contests in states including Wisconsin and Georgia could also directly affect abortion rights.

Other tests of the impact of abortion on races are coming sooner. North of New York City, a Democrat running in a special House election this month, Pat Ryan, has made abortion rights a centerpiece of his campaign, casting the race as another measure of the issue’s power this year.

“We have to step up and make sure our core freedoms are protected and defended,” said Mr. Ryan, the Ulster County executive in New York, who had closely watched the Kansas results.

Opponents of the Kansas referendum leaned into that “freedom” message, with advertising that cast the effort as nothing short of a government mandate — anathema to voters long mistrustful of too much intervention from Topeka and Washington — and sometimes without using the word “abortion” at all.

Some of the messaging was aimed at moderate, often suburban voters who have toggled between the parties in recent elections. Strategists in both parties agreed that abortion rights could be salient with those voters, particularly women, in the fall. Democrats also pointed to evidence that the issue may also drive up turnout among their base voters.

After the Supreme Court’s decision, Democrats registered to vote at a faster rate than Republicans in Kansas, according a memo from Tom Bonier, the chief executive of TargetSmart, a Democratic data firm. Mr. Bonier said his analysis found roughly 70 percent of Kansans who registered after the court’s decision were women.

“It is malpractice to not continue to center this issue for the remainder of this election season — and beyond,” said Tracy Sefl, a Democratic strategist. “What Democrats should say is that for Americans your bedroom is on the ballot this November.”

Inside the Democratic Party, there has been a fierce debate since Roe was overturned over how much to talk about abortion rights at a time of rising prices and a rocky economy — and that is likely to intensify. There is always the risk, some longtime strategists warn, of getting distracted from the issues that polls show are still driving most Americans.

“The energy is on the side of abortion rights,” he said. “For decades that hasn’t been true so it’s difficult for some people who have been through lots of tough battles and lots of tough states to recognize that the ground has shifted under them. But it has.”

He urged Democrats to ignore polling that showed abortion was not a top-tier issue, adding that “voters take their cues from leaders” and Democrats need to discuss abortion access more. “When your pollster or your strategist says, ‘Take an abortion question and pivot away from it’ you should probably resist,” he said.

A Kaiser Family Foundation poll released this week showed that the issue of abortion access had become more salient for women 18 to 49 years old, with a 14-percentage-point jump since February for those who say it will be very important to their vote in midterm elections, up to 73 percent.

That is roughly equal to the share of voters overall who said inflation would be very important this fall — and a sign of how animating abortion has become for many women.

Still, Republicans said they would not let their focus veer from the issues they have been hammering for months.

“This fall, voters will consider abortion alongside of inflation, education, crime, national security and a feeling that no one in Democrat-controlled Washington listens to them or cares about them,” said Kellyanne Conway, the Republican pollster and former senior Trump White House adviser.

Michael McAdams, the communications director for the National Republican Congressional Committee, said that if Democrats focused the fall campaign on abortion they would be ignoring the economy and record-high prices: “the No. 1 issue in every competitive district.”

One of the most endangered Democrats in the House, Representative Tom Malinowski of New Jersey, agreed that “the economy is the defining issue for people.”

“But there is a relationship here, because voters want leaders to be focused on fighting inflation, not banning abortion,” he said. Mr. Malinowski, who said he was planning to advertise on abortion rights, said the results in Kansas had affirmed for him the significance of abortion and the public’s desire to keep government out of such personal decisions.

“There is enormous energy among voters and potential voters this fall to make that point,” he said.