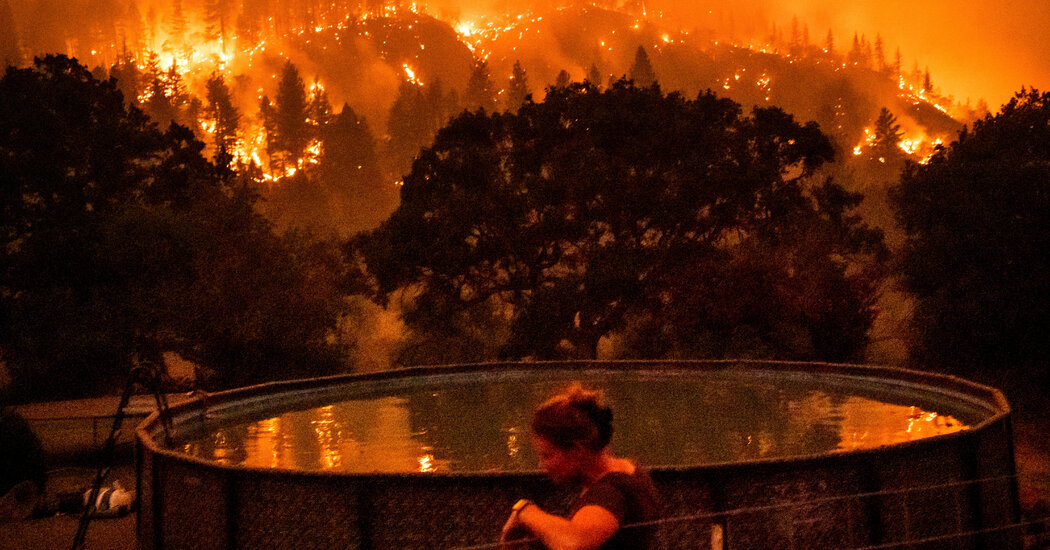 A fast-growing wildfire fueled by strong winds from thunderstorms and high temperatures in Northern California has grown to more than 51,000 acres in two days, becoming the state’s largest wildfire so far this year and forcing evacuations in rural neighborhoods.

The blaze, named the McKinney fire, began burning through dry timber on Friday in the Klamath National Forest in Siskiyou County, Calif., near the Oregon state line, the authorities said.

Officials had not reported any injuries or deaths associated with the fire as of Sunday morning. Gov. Gavin Newsom of California declared a state of emergency for Siskiyou County on Saturday, saying that nearly 2,000 people were under immediate evacuation orders. An additional 1,000 people have since been placed under evacuation orders, said Courtney Kreider, a spokeswoman with the Siskiyou County Sheriff’s Office.

By Sunday morning, the fire had not moved much closer to the city of Yreka, which has a population of about 7,800. But it had already destroyed more than a dozen homes and other structures in the surrounding area, Ms. Kreider said, and that number was expected to rise.

The heat from the fire generated a huge cloud called a pyrocumulonimbus, which has been referred to as “the fire-breathing dragon of clouds,” that essentially generated its own weather and reached more than 39,000 feet into the sky, according to the National Weather Service in Medford, Ore.

“The fire created thunderstorms, which could have caused new fires nearby,” Brad Schaaf, a meteorologist with the Weather Service in Medford, said by phone on Sunday.

The fire, which was zero percent contained as of Sunday morning, is one of more than 50 large wildfires and fire complexes that have burned across parts of the United States so far this year, according to the National Interagency Fire Center. In the foothills of the Sierra Nevada in California, the Oak fire has burned more than 19,000 acres and threatened thousands of homes and businesses. That fire was about 64 percent contained on Sunday.

The McKinney fire comes at a precarious moment for the state, which, along with the Pacific Northwest, is facing abnormally high temperatures this week as a heat wave blankets the region.

On Saturday, firefighters shifted their focus from battling the perimeter of the fire to helping residents evacuate and protecting structures, according to the U.S. Forest Service.

Videos and photos of the fire showed wisps of smoke spiraling up from trees as flames covered the Klamath National Forest with an orange glow. Cars fled on nearly empty roadways, and officers with the Redding Police Department helped residents evacuate as they watched the forest burn in the distance.

“Heads up to those in the far north state,” the state’s Office of Emergency Services said on Twitter on Saturday. “The #McKinneyFire is moving quickly and aggressively driven by weather conditions.”

Three additional fires in the county — the China 2, Evans and Kelsey Creek fires — have merged and burned about 115 acres, Ms. Kreider said. The Kelsey Creek fire was caused by a lightning strike overnight, she added.

Officials and meteorologists were worried on Sunday about possible thunderstorms that could develop through Tuesday evening. Mr. Schaaf said such thunderstorms could create more fires in the area if lighting struck.

Smoke from the McKinney fire, however, could lower temperatures and “counteract some of those thunderstorm ingredients,” he added.

Still, the Klamath National Forest said in a statement on Sunday that “these conditions can be extremely dangerous for firefighters” as erratic winds push the fire in random directions.

“It makes for a challenging and complex forecast,” Mr. Schaaf said.