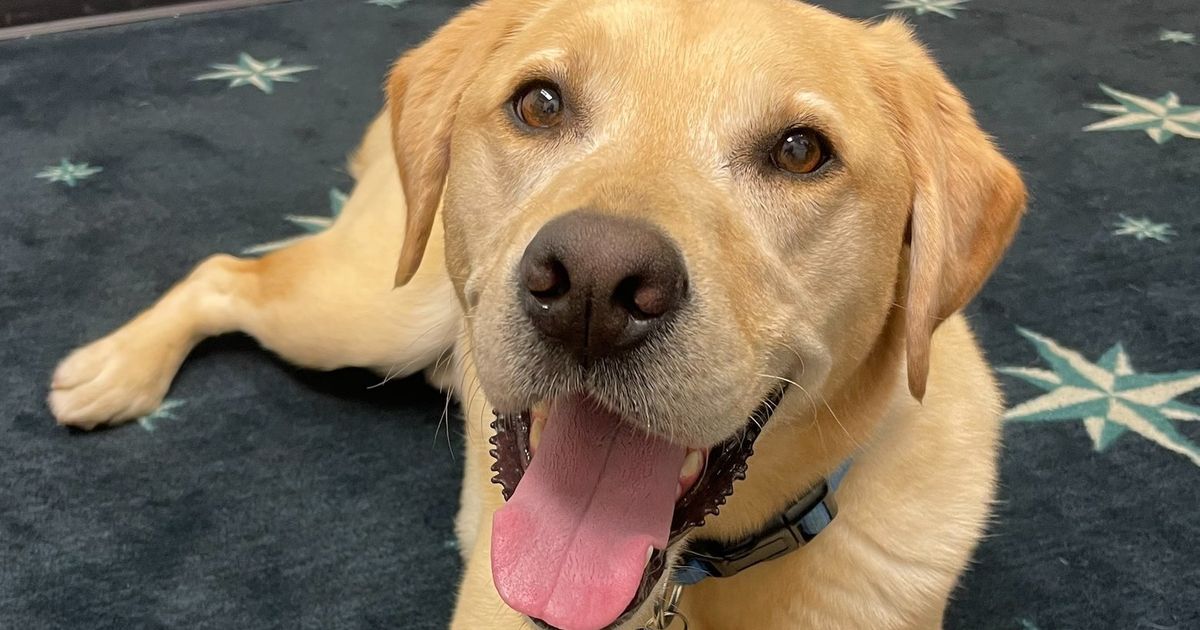 The Mariners activated a new member to their team on Saturday, making a roster move of a different sort. The latest addition is team-friendly in all ways with his contract paid in treats and belly rubs. He’s tireless in his pursuit of the baseball with closing speed aided by two extra legs. Though his version of the spitball — more of a slobber ball — can be a bit overwhelming.

But within a day and a half of arriving at T-Mobile Park, he’s already taken over as the most popular member of the Mariners.

“We do have another addition of the roster today,” manager Scott Servais said in his pregame media session before Game 1 of Saturday’s doubleheader. “We have a team dog; Tucker’s in the house.”

Indeed, Tucker, a 4-year-old yellow lab/golden retriever mix was officially announced as the team dog after hanging out in the clubhouse the past few days.

“We actually brought him in right after the All-Star break and kind of got him introduced to the guys and then we went on the road trip, but he did not travel with us,” Servais said. “So he’s been activated today. He’s a great addition to our team. It’s fun. It’s fun for the guys.”

In a statement from his Twitter account — @MarinersPup — that features a well-produced video of him running around, Tucker the Mariners dog tweeted: “I’m gonna get to hang out at the ballpark all the time, travel with the squad and enjoy my very own unlimited supply of baseballs. Doesn’t get better than this!”

The Mariners adopted Tucker through OkanDogs, a nonprofit shelter started by Tom and Jan Short in Cashmere.

Servais and his wife, Jill, have been big proponents of animal shelters and rescue dog organizations.

Jill Servais has worked in animal welfare for 30-plus years, getting her start at a municipal shelter in Tucson, Ariz., while Scott was playing minor league baseball. They currently have a rescue dog named Wilson.

At the Bark in the Park events held by the Mariners this season, Jill helped push for animal shelters to promote dog adoption by having different shelters bring adoptable puppies to T-Mobile Park.

At the most recent event, OkanDogs, Forgotten Dogs Rescue and Sunny Skys Animal Rescue had puppies on the field that grabbed the attention of players.

In January, the Servaises got a private plane to pick up 11 adopted puppies from OkanDogs and personally delivered five to Orcas Island and six to Friday Harbor.

“It’s really important to understand how many truly beautiful, adoptable animals are available in the state of Washington, in particular,” Jill Servais told the Times at the recent Bark in the Park event. “You don’t need to leave the state to find some great adoptable animals.”

While Tucker isn’t officially an emotional support dog, Scott Servais believes his presence is good for the players. Several players like Marco Gonzales, J.P. Crawford and Ty France are dog owners so they get a dog at home and at work now.

“We are just trying to bring awareness to rescues all over the state of Washington,” Servais said. “And there’s dogs out there for everybody and we hit a home run with this one. This little guy is great. Our players are excited about it. It’s a nice little distraction with him in the clubhouse. They love the little guy.”

The idea to have a dog in the clubhouse was something Servais considered for over a year.

“It needed to be the right one,” he said. “We have a great relationship with the people at OkanDogs and they called and said we might have the right one.”

Servais went into a deadpan on the typical MLB process, saying: “He was scouted very heavily. We ran people in there to cross-check him and this dog had big-time numbers. So, he went high in the draft and we are happy to have as a free-agent addition.”

Joking aside, Servais grew serious about animal rescue. He has not been afraid to voice his concern about social issues like voting rights, gun control and social justice.

“Hopefully this can create some awareness to a dog rescues throughout the state of Washington,” Servais said. “It’s something that’s certainly needed. For people that are looking for dogs, you can get any type of dog anywhere, it’s out there for you. So adopt, don’t shop.”