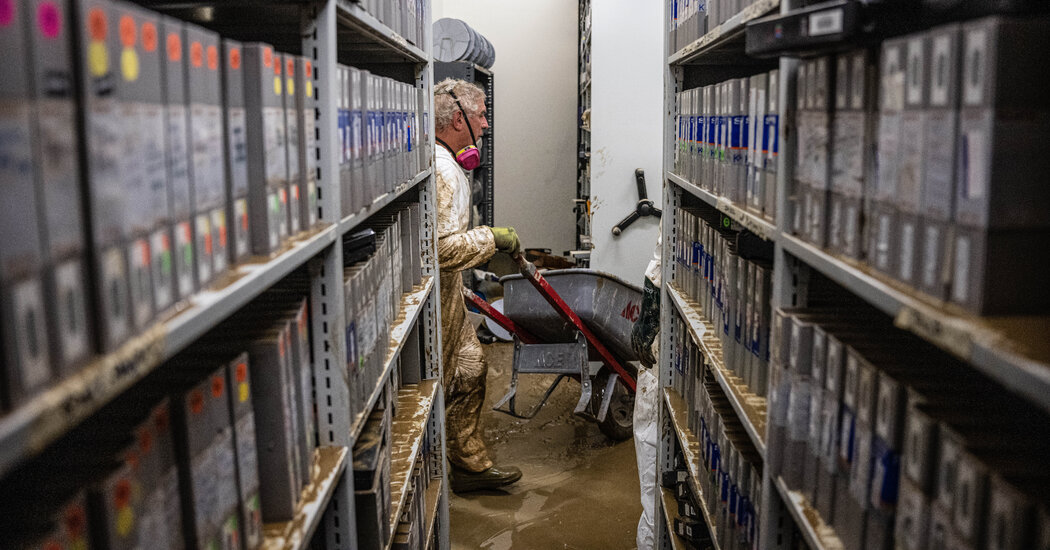 Appalshop has been a cornerstone of Whitesburg, Ky., since 1969, working to tell stories about Appalachian people through art, film, music and more with a focus on their voices. Its theater usually hums with actors portraying the experiences of the region; the community radio broadcasts music and local news; and its rich archive provides a huge repository of central Appalachian history.

But on Wednesday, as Alex Gibson, the organization’s executive director, stood inside the building that has housed Appalshop for four decades, all he could see was mud.

Water damage covered the walls of the radio station. Every chair in the newly renovated 150-seat theater was caked in sludge. Filing cabinets, tables, CDs and loose film strips were tangled together. And possibly worst of all, many of the contents of Appalshop’s archives were covered in mud and debris after devastating floods in the region last week left the building submerged in water.

Mr. Gibson said he was most struck by the “indiscriminate nature with which the water destroyed things.”

“I’m seeing things that shouldn’t be together,” Mr. Gibson said. “There’s a banjo constructed by a master banjo maker covered in mud next to one of our first LP releases in 1970.”

He added, “We used to have an organized archive.”

The floods killed more than three dozen people across Eastern Kentucky and displaced hundreds more. Many are still without power. Even amid the loss of life and property, members of the Appalachian community were also mourning the loss of the region’s cultural heritage.

“We’re going to try our best to save everything we can save,” Mr. Gibson said. “It’s obviously devastating emotionally to see such precious materials just sitting in water and whatever chemical combination is on my boots right now.”

Mr. Gibson and some 50 volunteers are working against the clock to recover what Appalshop estimated to be hundreds of thousands of archival pieces from across mediums: film, photographs, artisan crafts, woodworking, musical instruments, magazines, newspapers, posters and personal family archives that have been donated to the group — all depicting life in the Appalachian Mountains.

Water tore through the first floor of Appalshop’s building, which it has occupied since 1982. That included the radio station, theater, climate-controlled vault for archives and some gallery space used for art shows.

When Appalshop first got word of potential flooding last week, the priority was making sure the staff was safe. Then they mobilized to use their resources — social media, their website and the radio station — to get information to the Whitesburg community.

Now the organization’s highest priority is making sure the archives are rescued quickly, before mold can set in. It’s still too soon to tell how many of the items are salvageable, damaged or destroyed, but the rescue has been aided by visiting archivists from nearby colleges and universities in Kentucky, Tennessee, Pennsylvania and the greater Appalachia region.

A piece that is likely gone is “Sun Quilt,” a stained glass sculpture by a local artist, Dan Neil Barnes, made up of five interlocking squares that mimic the quilts common through the region. It stood outside the Appalshop building and was a popular gathering spot for visitors.

“That was a particular ache,” said Meredith Scalos, Appalshop’s communications director. “It became an iconic piece of the building. We’re not sure if there are pieces of it, but it was glass, so probably not.”

Ms. Scalos said that Appalshop has had a history of documenting floods and climate change, and that she could “see a future where we will be telling this story, too.”

In the aftermath of the floods, Appalshop wants to prioritize the community, Ms. Scalos said, and has raised tens of thousands of dollars for various mutual aid groups. The outpouring of support from archivists and volunteers is a true mark of the mountain community, she added. She said there was a similar sense of camaraderie after tornadoes killed 74 people in the region in December.

“Kentuckians show up for each other, we do,” she said.

Ms. Scalos, who grew up in rural Kentucky, said she joined the organization in part to “reconnect with my own heritage.” “Appalshop has been always more of an idea in making people feel it’s OK to be proud to be Appalachian,” she added.

But the building itself has become central to the work the group does throughout the community, hosting art openings, concerts and regular radio programming. Appalshop started as a film workshop in 1969 but expanded to include photography and literary programs, a theater company, recording studio and community organizer, all centered around the mission of documenting and celebrating Appalachian culture. Appalshop had just finished its annual summer documentary program for young people and was set to show their films the week of the floods.

Steve Ruth, a volunteer DJ on WMMT 88.7 FM, the Appalshop’s community radio station, was looking forward to hosting a bluegrass event on July 28, but the floodwaters had other ideas.

“Walking into the radio air room and seeing the situation will about bring you to your knees,” he said. “There was about five feet of water in that space, I’m sure it looked like an aquarium at one point.”

Mr. Ruth said the Whitesburg community was in shock but was “rising to the challenge.” He and Appalshop hope to have the radio station back up and running at a temporary location in town soon.

While a full recovery of Appalshop may take months and the fate of many of the building’s contents remains unknown, a sign of hope brought Mr. Gibson, the center’s director, some joy: despite floodwaters of more than 20 feet, a young apple tree remained standing with some 30 apples attached.

“This tree was clearly totally submerged in the rapids, and it still has so many apples and leaves on it,” he said. “I didn’t know an apple was that hard to pluck.”