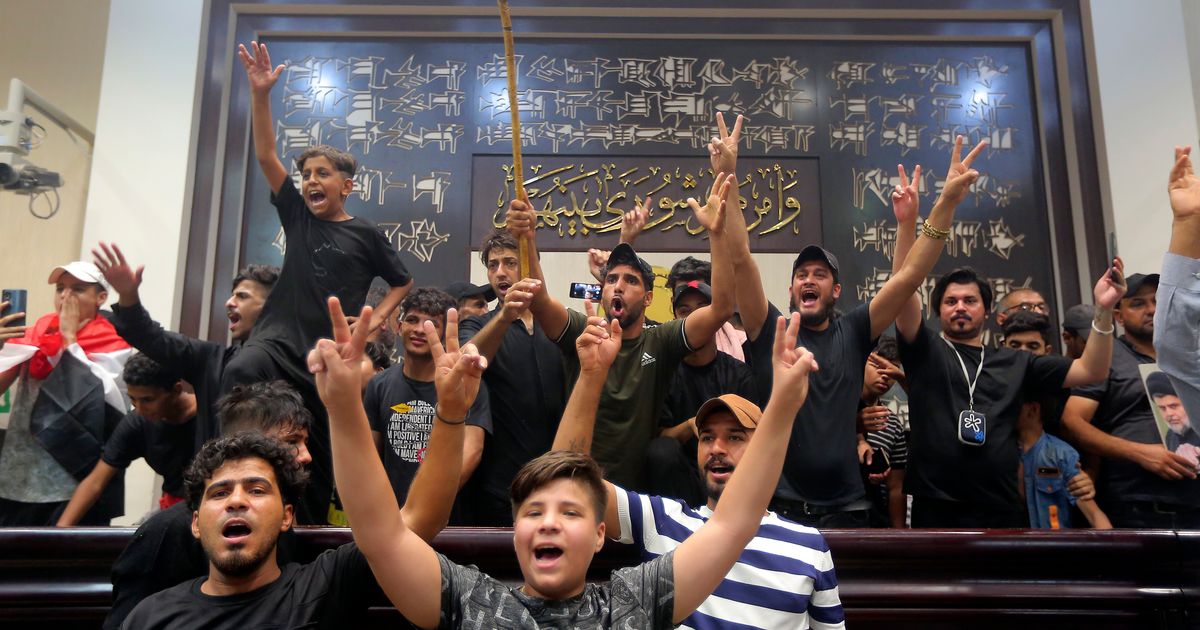 BAGHDAD (AP) — Hundreds of followers of an influential Shiite cleric were camped out Sunday inside the Iraqi parliament, after toppling security walls around the building and storming in the previous day.

The protesters — followers of Iraqi Shiite cleric Muqtada al-Sadr — pledged to hold an open-ended sit-in to derail efforts by their rivals from Iran-backed political groups to form the country’s next government.

The developments have catapulted Iraq’s politics to center stage, plunging the country deeper into a political crisis as a power struggle unfolds between the two major Shiite groups.

On Sunday, the sit-in appeared more of a joyous celebration that a political protest — followers of Iraqi Shiite cleric Muqtada al-Sadr were dancing, praying and chanting slogans inside the parliament, in praise of their leader.

In between, they took naps on mattresses lining the grand halls.

It was a scene starkly different from the one on Saturday, when the protesters used ropes and chains to topple cement walls around the heavily fortified Green Zone in Baghdad, then flooded into the assembly building. It was the second such breach last week, but this time they did not disperse peacefully.

Iraqi security forces fired tear gas and sun grenades at first, to try to repel the demonstrators. The Ministry of Health said about 125 people were injured in the violence — 100 protesters and 25 members of the security forces. Within a few hours, the police backed off, leaving the parliament to the protesters.

Outside the building, garbage from food packages and other trash littered the street leading up to the parliament gate while trucks bused in giant couldrons of steaming rice and beans to feed the protesters.

There was also humor inside the parliament Sunday among al-Sadr’s followers.

One protester, Haidar Jameel assumed the seat of Parliament Speaker Mohammed Halbousi — among the most powerful political figures in Iraq — and from it, looked on at his rowdy fellow protesters in the assembly.

“This is an open-ended sit-in, we will not return until our demands are met,” he declared.

Boxes of bottled water were piled up on the street and tents were erected. A small child handed out sweets, teenagers sold juice from sacks.

The takeover of the parliament showed al-Sadr was using his large grassroots following as a pressure tactic against his rivals in the Coordination Framework — an alliance of Shiite parties backed by Iran and lead by former Prime Minister Nouri al-Maliki — after his party was not able to form a government despite having won the largest number of seats in the federal elections held last October.

Neither side appears willing to concede and al-Sadr seems intent on derailing government formation efforts by the Iran-backed groups.