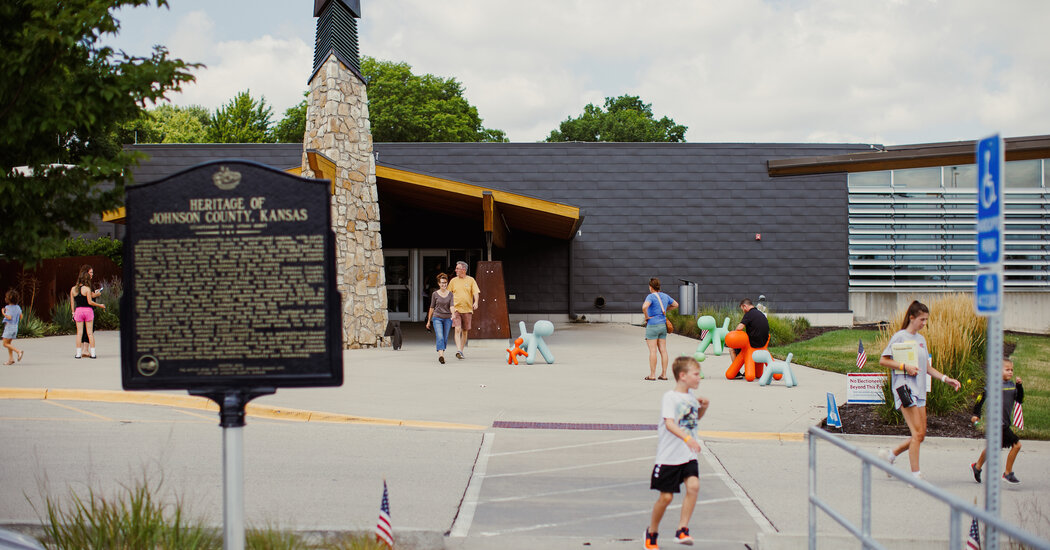 PRAIRIE VILLAGE, Kan. — DeAnn Hupe Seib is a fiscally conservative, churchgoing Republican from rural Kansas. When faced with a ballot question about whether abortion rights ought to be removed from her state’s constitution, she voted no. So did her home, Jefferson County, which favored Donald J. Trump by a 32-point margin in 2020.

“I was old enough that I remember stories of women who could not get abortions or had to defy their church in order to get in and get an abortion in order to save their lives,” said Ms. Hupe Seib, 63, a lawyer. “So it’s a very real issue to me, and I know it can be again.”

The sweeping victory for abortion rights in Kansas on Tuesday — the country’s first post-Roe vote on the issue — relied on a broad coalition of voters who turned out in huge numbers and crashed through party and geographic lines to maintain abortion access in the state. The result was an election with a stunning 18-point margin that is shaking up national politics ahead of the midterm elections.

Abortion rights supporters used conservative-sounding language about government mandates and personal freedom in their pitch to voters, and made a point of reaching out to independents, Libertarians and moderate Republicans.

“Some of these issues really are nonpartisan — people don’t see it through the partisan lens the way a lot of us do,” Ashley All, a spokeswoman for Kansans for Constitutional Freedom, which led the effort to defeat the amendment, told reporters on Wednesday. “We were able to engage folks in a nonpartisan conversation about this issue, and that is something I think that really played to our strengths.”

Going into Tuesday, there were many reasons to doubt that supporters of abortion rights could fend off a well-financed effort in a reliably conservative state to open the door for lawmakers to ban or severely restrict the procedure.

Republicans in the state hold commanding legislative majorities and have long campaigned on restricting abortion. The Roman Catholic Church donated millions of dollars to the effort to pass the amendment. And the issue was strategically placed on the August primary ballot, a time of year when Kansas Republicans usually have competitive races, but when Democrats and political independents often have little to draw them to the polls.

But not only did abortion rights supporters win, they won big — 59 percent to 41 with most of the votes counted as of Wednesday afternoon — in a result that was seen nationally as a reflection of voter anger over the demise of Roe v. Wade and a hopeful sign for Democrats in an otherwise foreboding political climate.

“We won this race blindfolded and with one arm tied behind our back. And we still beat the tar out of them,” said State Representative Stephanie Clayton, a Democrat from Overland Park, in suburban Kansas City, who until a few years ago served as a moderate Republican in the Statehouse.

The victory, however, reflects the state’s specific brand of politics: conservative and pragmatic, with an independent streak that often defies expectations. The state hasn’t supported a Democrat for president since 1964, but routinely elects Democratic governors.

The ballot referendum was rooted in a 2019 ruling by the Kansas Supreme Court that found that the right to an abortion was guaranteed by the State Constitution. Abortion in Kansas is legal up to 22 weeks but requires a waiting period and parental consent for minors.

The abortion rights victory included overwhelming margins on Kansas’ few patches of left-leaning political turf: 81 percent to 19 in the county that includes the college town of Lawrence; 74 percent to 26 in the county that includes Kansas City; and 68 percent to 32 in populous Johnson County, a suburban area that was once reliably Republican but that has trended rapidly toward Democrats since Mr. Trump’s entrance into national politics.

But the abortion rights side also won convincingly in the county that includes Wichita, a more conservative place with a long, sometimes violent, history at the center of America’s abortion debate. Abortion rights supporters won in Topeka, the politically mixed state capital, and in Republican-leaning areas around military bases. Perhaps most surprising, they carried several rural and exurban counties where Republican candidates routinely trounce Democrats.

Kansas is also home to a Catholic archbishop who has ardently opposed abortion and played a leading role in the ballot campaign, mobilizing Catholic voters.

Value Them Both, a group that led the vote-yes effort, reported raising $2.45 million this year from the Archdiocese of Kansas City, Kan., which Archbishop Joseph F. Naumann leads, and about half a million from the Diocese of Wichita. Churches held vigils, and parishioners donated money, which he hoped would offer an example to other dioceses on how to engage the issue.

Not all Catholics were persuaded.

Lorraine Durie, 57, a Democrat from Overland Park, said the amendment first came up in a homily at her church this spring. “Although I feel like I’m a really good Catholic, it just didn’t line up with how I felt,” she said. She voted against the amendment and in favor of preserving abortion rights.

The significant margin of loss, even in areas with a strong Catholic presence, presents an evangelistic challenge for the church, Archbishop Naumann said in an interview on Wednesday. A large number of Catholics may be baptized but do not follow church teaching or participate in church life, and instead are overly shaped by the broader society, he said.

“There’s this reaction of people, like this tremendous right has been taken away from them,” he said. “When you ask, Well, what is the right that has been lost, it is really the right to kill our own children, people in our culture and society have been conditioned unfortunately to see this as some great advancement.”

Archbishop Naumann said some Kansans would feel “buyer’s remorse,” as the state would increasingly become “a destination state for abortion.” Two bordering states have now banned the procedure in nearly all cases, and, even before Roe fell, nearly half the women who received abortions in Kansas lived elsewhere.

Kansans have complicated political views, and extrapolating the amendment results to partisan races has pitfalls. Sharon Schnieders, a Republican from Ottawa, Kan., voted in favor of the amendment to remove abortion protections, in part because of her experience as an adoptive parent. But Ms. Schnieders, a retired teacher, said she also planned to support the re-election of Gov. Laura Kelly, a Democrat who supports abortion rights, because of her work on education issues.

Ms. Hupe Seib, the Republican voter in rural Jefferson County who came out against the abortion amendment, also plans to vote for Governor Kelly.

Though she still votes Republican in local races, Ms. Hupe Seib did not support Mr. Trump and she said she feared her fellow Republicans in state office would keep trying to restrict access even after the vote on Tuesday. She planned to support Ms. Kelly in November to guard against that.

“Unless we vote out some of these right-wingers on abortion,” Ms. Hupe Seib said, “they are going to be back next year and the year after that, continually trying to restrict abortion.”