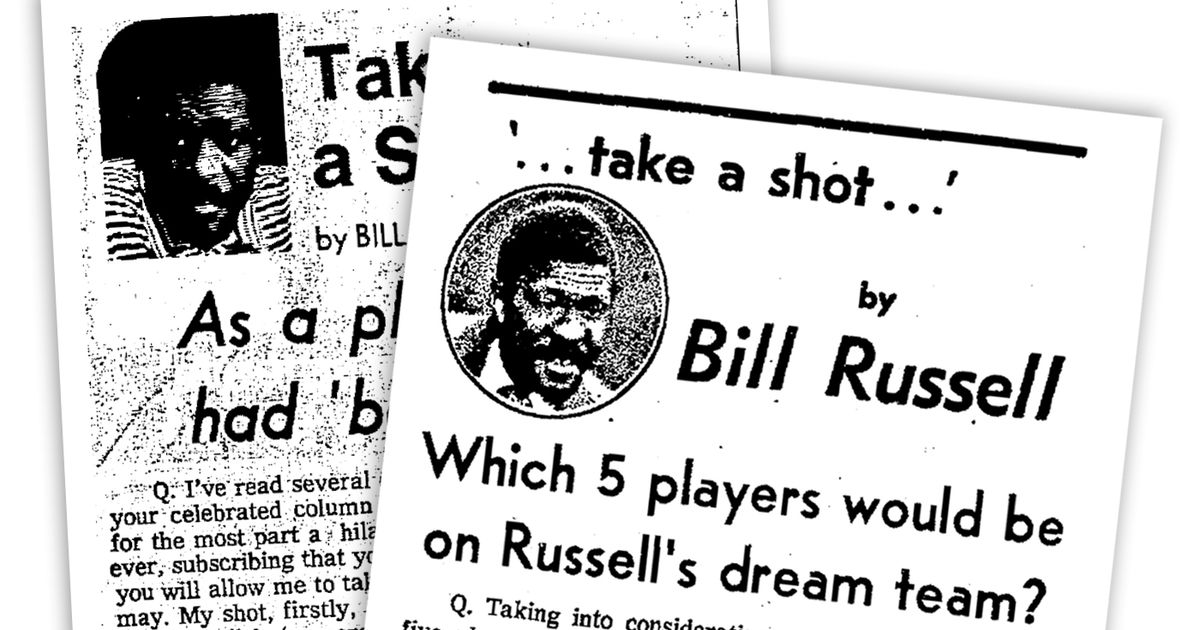 Russell lived on Mercer Island for decades and coached the Sonics from 1973 to 1977. Believe it or not, he also wrote a recurring column in The Seattle Times sports section from December 1973 until at least 1980.

Russell was outspoken in life — and so too, in his column.

We pored through the archives from his “Take a shot” columns to see what we could find and here are some highlights:

Dec. 20, 1973. This is one of his earliest columns and he wasn’t afraid to take the heat from a fan or to criticize one of his players.

Q: I was wondering if you could explain the benching of John Brisker, after you said “John has the firepower we need.” — Roger Haight, Seattle

Russell: John does have the firepower we need. But we need more. What most people don’t realize is that most games are won on defense, no matter the sport. And the reason I haven’t played John is that he hasn’t played defense the way I want it played.

Russell: That’s a question I’ve been asking every day in practice.

Q: Do you think Kareem Abdul-Jabbar is better than you were? I think you are. — Brian Job, Bellevue

Russell: I never argue with people who write me nice letters.

Feb. 23, 1975. Russell had just been inducted into the Basketball Hall of Fame but he chose not to attend the ceremony, saying he should not have been the first Black player elected. (He wanted it to be Chuck Cooper, the NBA’s first Black player.)

Q: From childhood, I have had the utmost respect for you both as an athlete and as a man. I am now reading that you are refusing induction into the Hall of Fame. Some people say you are ungracious. It is obvious that you have good reasons. This takes a special kind of courage. I am proud of the fact that a man possessing your talent and esteem is a part of our city. — James Englund, Seattle

Russell: Thank you … very much.

Q: I was wondering if any females have ever tried to become NBA referees? I am 23 years old and feel I could become a good referee, given a chance. What are the chances? — B. Davis, Redmond

Russell: At the All-Star Game, we had a meeting with the supervisor of officials. And he stated, unequivocally, that they would not turn down any applicant because of sex. Besides, I think we need a good woman referee, because incompetence should not be confined to men.

Feb. 6, 1977. Again, he seems to be foretelling the future when someone asks about standing for the anthem.

Q: We have no complaints about your basketball coaching as it pertains to the game, but why can’t you teach your (players) to at least show respect for the only country in the world where they can make a living doing what they do, by standing still, with some degree of attention and good appearance during the few seconds when our national anthem is played? — Sid and Sally Porter, Seattle

Russell: In case you hadn’t noticed, American means a lot of things to a lot of people and one of the things that makes it what it is is the ability to exercise freedom. This is not some of those other countries that are so uptight and insecure about what their country is about that they have to wave the flag to prove they are patriots. What America is about to some people is “I’ll show my respect my way and you show your respect your way.”

I don’t own patriotism and neither do you. The best example for young people is his or her own mother or father. Thank you.

Russell: It seems one of the worst diseases you can get in this country is to be poor. As one more punishment for catching that disease, we’ll keep increasing the price of gas! That’ll teach ’em to be poor! Some people think that because you’re poor most of the pleasures of life should be denied to you.

June 8, 1975. This might his best response. Superb trash talking. The headline was “As a player, Bill had ‘bad hands.’”

Q: I’ve read several of your statements and answers in your celebrated column. They were for the most part a hilarious travesty and a facade. I trust you will allow me to take one of your patented “shots” if I may. Your reputed statement that Bill Russell is “numero uno” or “ichiban” is preposterous. True, you were an outstanding defensive center. But from a total player you were not Kareem or Wilt Chamberlain. I interpret your statements as pompous.

As a coach, I believe you have not proven yourself successful or futile, it is too early to judge.

Because of the nature of this topic, I am aware that I am subject to your quasi wit and jargon, which shall be interesting. Please be aware that descriptive lambasting below the belt is a technical foul. — Edward Nakamoto, Bellevue

Russell: As for the first part about being a complete basketball player, you were right in one sense, I did have one major problem as a player. I had bad hands, because I have 11 championship rings and only 10 fingers. As for coach, I have now coached for five seasons and have only won two world championships. As for those other things, I have to get a dictionary out first … but I’m impressed with the vastness of your vocabulary.