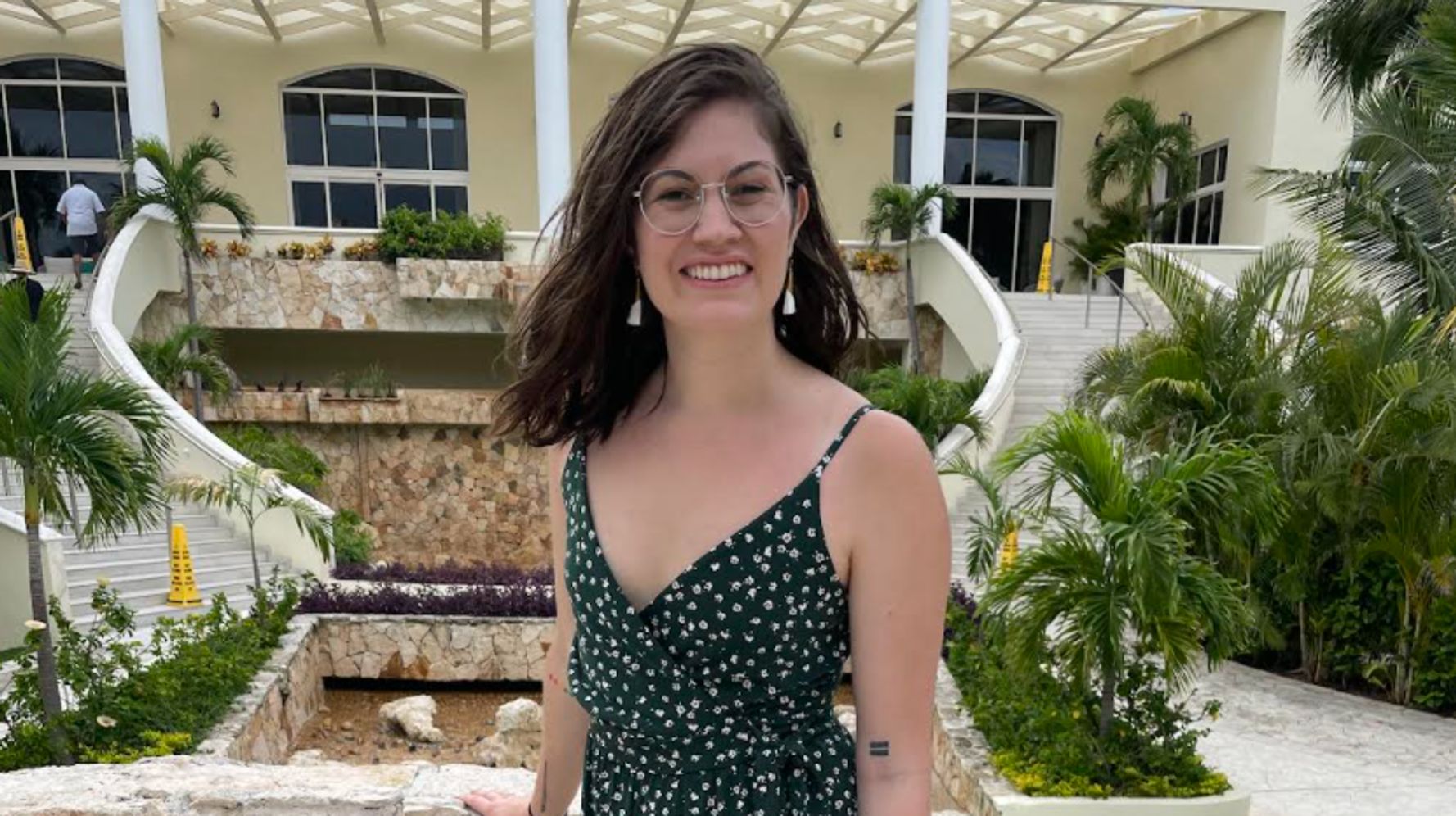 I tried on a dress for a friend’s wedding recently. It was a deep navy blue, slinky, with a colorful floral print and a little pull of fabric at the hip. I wore it around my apartment with a pair of wedges and basked in how it felt. My wife, typing at her laptop in the living room, asked me the question she asks whenever I try on a new outfit.

“It looks great, babe,” she said. “How does it feel on your gender?”

Earlier this year, I came out as a nonbinary woman. For years, my attempts to fit in as a cisgender woman felt like a long drag performance ― like wearing a series of costumes and hoping they’d convince everyone around me. I didn’t feel like a man, but I didn’t always feel like a woman, either; my sense of my gender ebbs and flows almost day to day. But identifying as anything other than a woman felt like a responsibility I hadn’t earned; I wasn’t planning on physically transitioning, and I didn’t want to announce an identity that didn’t belong to me.

Still, as I neared the end of my 20s — and as I learned more about what being nonbinary means — I realized I could be so much happier if I said out loud what I was feeling. I found more nonbinary people to look up to, some who physically transitioned and some who didn’t, and broadened my own horizons about what it can mean to be nonbinary. Slowly I came out to myself, then to my wife, then to my closest friends, and finally to the internet.

For many of my friends who have come out as nonbinary in the past few years, a common set of steps followed: a new, less-gendered name; a new set of pronouns (usually they/them); and for my friends assigned female at birth, a more masculine-of-center wardrobe.

When I came out, I did the same — kind of. I told friends to call me either Camille or Cam and to use either she/her or they/them pronouns for me. “Both are fine!” I told friends and co-workers. And I meant it. I bought a bunch of high-neck T-shirts and some looser-fitting jeans, convincing myself this was the uniform of a nonbinary person. And I waited to see how all these changes might feel.

A funny and amazing thing happened: Everyone in my life immediately switched to calling me Cam, a name that previously only my closest friends had used as a nickname. The change caught me off-guard. I was surprised to find that I missed being called Camille, especially when coming from people closest to me, like my parents and my wife.

I want to make one thing clear: I am incredibly lucky to have a community that immediately began using a new name and pronouns for me when I asked them to. Too many transgender and nonbinary people spend years of their lives being misgendered and deadnamed by people they believed to be their closest loved ones, and the effects can be extremely harmful. So I’m certainly not complaining that when I experienced my own gender realization, my loved ones rallied around me.

But knowing how lucky I am made it even more complicated when I started to recoil at only being called Cam. Suddenly, it felt like I was in drag all over again, like I was performing a new version of myself in order to fit what other people believed being nonbinary meant. I couldn’t figure it out: This was the most honest I’d ever been about my gender identity with myself and my community, and still, it didn’t feel good.

“I’m realizing that this identity isn’t about banning anything from my name or my wardrobe; it’s about creating space for an abundance of queer possibilities.”

When I first started addressing my big gender feelings last summer, my wife and I had a couple of emotional conversations about it, many of them late at night on her parents’ patio in Baltimore.

“Can I still call you my wife?” she asked thoughtfully. “I’ll love you no matter what you’d like me to call you, but that’s an important word to me.”

And it’s true; I don’t feel like everything about my womanhood has disappeared. It doesn’t feel like misgendering to use she/her pronouns to refer to me. And being a “wife with a wife” has been important to me since my wedding day. But there’s still a little voice in the back of my head asking, Is that allowed? Does this count as nonbinary?

Representation of nonbinary people in the media is so new and sparse that it’s hard to envision how to “do it right,” how to express my identity in a way that doesn’t diminish others’ expression of theirs. The media tends to botch nonbinary celebrity comings-out, and nongendered clothing has historically been code for masculine-of-center (often modeled on thin, white bodies). And while the landscape is gradually improving, we still have a long way to go before society at large really understands what it means to be nonbinary.

As a result, I’m reckoning with how much space I am allowed to take up in this community, and whether my occasional draw to femininity negates this new identity. Was it even worth coming out if my life isn’t going to change much? If my nonbinary identity doesn’t require a new name or pronouns, a new wardrobe or a complete reimagining of my marriage, am I allowed to claim it at all?

I have to believe that the answer is yes. Because it’s a disservice to all nonbinary people — and to all people, really — to imply that there’s only one way to do any kind of gender. Gender is so deeply personal, messy, and for many of us, constantly changing. We owe it to ourselves and to our loved ones to lean into that uncertainty, to trust ourselves to figure out what feels most affirming and validating, and to appreciate what we’ll learn about ourselves along the way. We are only at the beginning of imagining what a future that celebrates nonbinary people can look like. That should be exciting, not discouraging.

“It’s a disservice to all nonbinary people — and to all people, really — to imply that there’s only one way to do any kind of gender. Gender is so deeply personal, messy, and for many of us, constantly changing. We owe it to ourselves and to our loved ones to lean into that uncertainty.”

Now, I’m excited to help paint a more inclusive, expansive picture of what it means to be nonbinary — one that’s bursting with color and light and that honors how different our experiences of gender can be. Just as every woman experiences womanhood differently, no two nonbinary people have the same experience of their gender. As the spectrum of what being nonbinary looks like grows, our collective understanding of gender grows, too. There is so much more we can be — once we give ourselves permission to realize it.

Many nonbinary people have one affirming name and one affirming set of pronouns. I have two of each. None of us has a greater claim to this identity than another.

I ended up wearing that slinky dress to the welcome party and a jumpsuit to the wedding. I looked great and felt great. But more importantly: In both outfits, I felt like myself. When I first came out as nonbinary, I thought it meant an end to dresses and makeup, to anything that could be coded as too womanly. I didn’t think they could ever feel like me again. Now I’m realizing that this identity isn’t about banning anything from my name or my wardrobe; it’s about creating space for an abundance of queer possibilities. It’s about letting myself be whatever I want to be.

For now, I’m sure of a few things: I like being called Camille just as much as I like being called Cam — I still mean it! Some days, they/them pronouns feel really affirming; other days I could take them or leave them. And I’ll always feel more comfortable in a jumpsuit than a dress, but that doesn’t mean the right dress isn’t out there once in a while.

All of these things can be true, and I can still be nonbinary. It’s a truth I’ll keep reminding myself, no matter how long it takes.

Camille Beredjick is a writer and nonprofit editorial strategist living in Chicago. Her writing has appeared in Catapult, BuzzFeed, Narratively, Autostraddle, The Advocate, Mic, and elsewhere.

Do you have a compelling personal story you’d like to see published on HuffPost? Find out what we’re looking for here and send us a pitch.