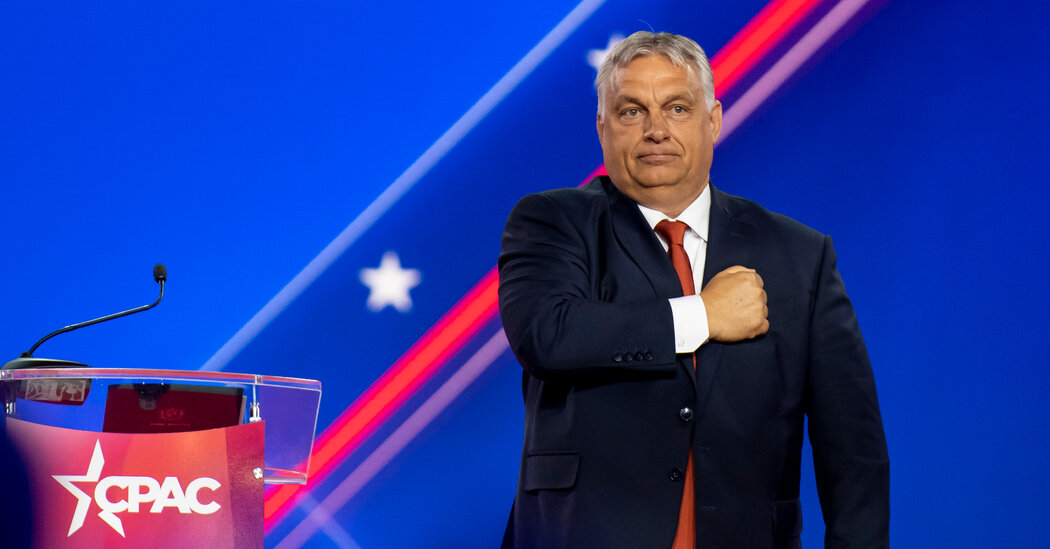 DALLAS — It was a reception from conservatives that would be expected for a party leader like former President Donald J. Trump, replete with standing ovations, glad-handing and roaring approval for a defiant message opposing immigration and gay marriage.

But the recipient of the heroic welcome on Thursday was Viktor Orban, the Hungarian prime minister, who has been widely condemned for his attacks on democratic norms. At the Conservative Political Action Conference in Dallas, he was an opening headliner.

Revered by a wing of the American political right, Mr. Orban, the European Union’s longest-serving current leader, arrived at CPAC after stirring new outrage with his recent comments opposing a “mixed race” society.

Mr. Orban defiantly shrugged off the criticism in his speech on Thursday, saying that the news media would label him a “far-right, European racist, antisemite strongman, Trojan horse of Putin” in its headlines about his remarks. He attacked those accusing him of racism and antisemitism as “simply idiots.”

“They want us to give up our zero-migration policy because they also know that this is the decisive and final battle of the future,” Mr. Orban said.

Mr. Orban has a long history of airing such contempt, and his antagonism — toward immigrants, the news media, “wokeness” and more — has helped cement his status with American conservatives, who have provided him with a far-reaching platform. Among them is Tucker Carlson, the Fox News commentator, who traveled to Hungary for a feature on the prime minister. In May, CPAC hosted a conference there.

He joined an opening day lineup that included Gov. Greg Abbott of Texas, the Fox News host Sean Hannity and Sarah Palin, the former Alaska governor. The conference will culminate this weekend with a speech by Mr. Trump, who has frequently been compared to Mr. Orban.

Protesters showed up, too, only to be escorted away by the police. The demonstrations hinted at the wider outrage associated with Mr. Orban’s presence at the gathering on the heels of his July remarks, which drew comparisons to Nazi rhetoric.

“At one level, Orban simply played the culture wars cards he has always played, leaning into his anti-immigration campaign, his ‘family values’ campaign against gender fluidity and gay rights, and his law and order campaign,” Kim Lane Scheppele, a professor of sociology and international affairs at Princeton University, said in an email on Thursday. “He expected cheers for those positions — and he got them.”

Jerry Brooks, 58, a convention attendee from Live Oak, Fla., who hosts a podcast called “In Black & Right,” said in an interview on Thursday before Mr. Orban’s speech that he had been impressed by the Hungarian leader.

“He seems to be speaking a sort of an international language — and that’s freedom,” said Mr. Brooks, who is Black.

Not all of the paying attendees identified as Trump supporters. Some were first-timers at CPAC, there explicitly to hear from Mr. Orban, who they said embodied their views about putting their country first.

Among them was a contingent of about 30 people from the Hungarian Club of DFW. Lana Kerstein, an organizer for the group who holds U.S. and Hungarian citizenship, said in an interview before the speech that she had long admired Mr. Orban for his efforts to preserve Hungary’s culture and the rule of law.

“What’s wrong with that? I don’t think it’s wrong. This nation has to survive,” said Ms. Kerstein, a businesswoman in her mid-40s who described herself as conservative.

Dana Spencer, 46, a retired dog groomer from Barry, Texas, which is about two hours from Dallas, said in an interview that she was not familiar with Mr. Orban but could appreciate his stance on immigration.

“I want people to come in legally,” said Ms. Spencer, a first-time CPAC attendee. “We’re paying for their housing, their flights, their bus rides to New York.”

The support Mr. Orban found in Dallas contrasted with the fallout from his July speech in Romania.

“These countries are no longer nations: They are nothing more than a conglomeration of peoples,” Mr. Orban said, according to a translation from The Associated Press, assailing countries in Europe that have large numbers of immigrants.

He spoke of a divided Europe where immigrants were changing the character of “our world.”

“We are willing to mix with one another, but we do not want to become peoples of mixed race,” Mr. Orban said. “Migration has split Europe in two — or I could say that it has split the West in two.”

Criticism of those comments was swift.

Zsuzsa Hegedus, a confidante of Mr. Orban’s, wrote in a July 26 resignation letter published in the Hungarian news media that not even the most “bloodthirsty racist” could condone Mr. Orban’s rhetoric. She compared Mr. Orban’s message to themes used by the Nazis, including Joseph Goebbels, the propaganda chief for Adolf Hitler.

“I don’t know how you didn’t notice that you were presenting a pure Nazi text worthy of Goebbels,” she wrote.

Mr. Orban’s latest audience with leaders of the political right in the United States comes as Republicans are girding for the midterm elections, in which they hope to win control of the Senate and House. Republicans have so far nominated a string of candidates who have disputed the legitimacy of the 2020 presidential election and who could affect the outcome of the next one.

Mr. Orban, who points out that he has won free and fair elections in order to justify what he calls “illiberal democracy,” has also used the power of his office to shape the contours of elections more to his liking.

On Tuesday, Mr. Trump welcomed Mr. Orban to his golf resort in Bedminster, N.J., where the two posed for photographs. It was an audacious reunion between the former president and Mr. Orban, whom Stephen K. Bannon, a former top Trump adviser, once called “Trump before Trump.”

Mr. Orban’s parting words for CPAC on Thursday were provocative.

“The globalists can all go to hell,” he said. “I have come to Texas.”