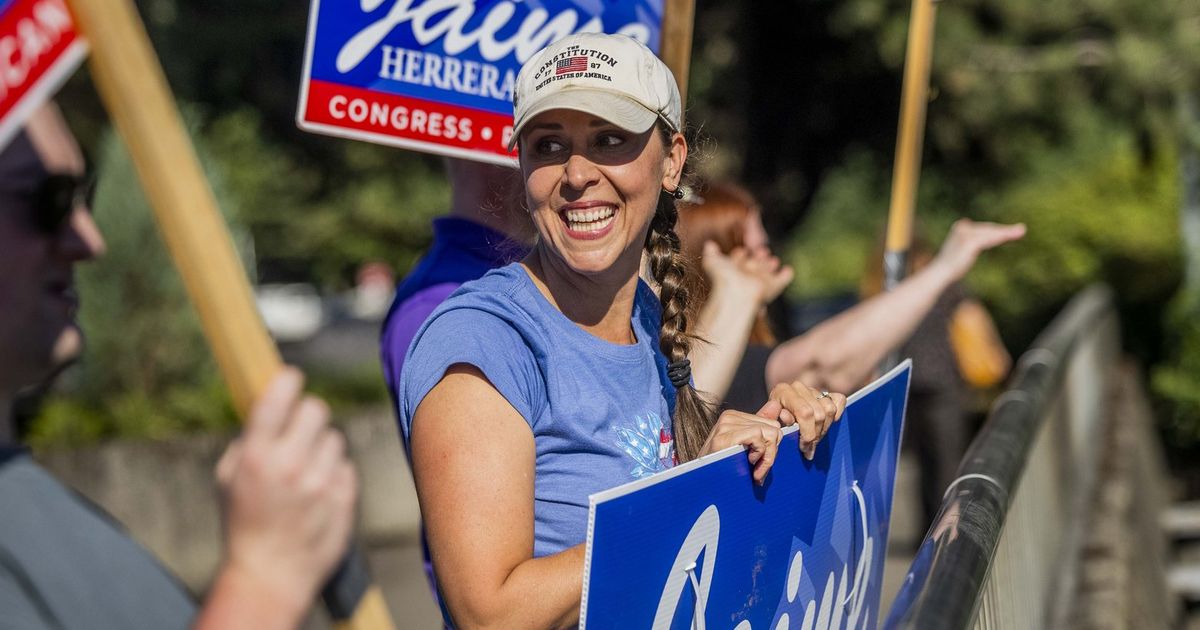 And yet, in a crowded field with fractured opposition, the Republican congresswoman from Battle Ground was poised to advance to the general election, in which she will be a substantial favorite.

If she does survive a far-right backlash fueled by her vote to impeach former President Donald Trump, it will be because of voters like Mike Schabo. Schabo, a forester from Yacolt, was dropping off his ballot Tuesday afternoon. He would be waking up before dawn the next morning for a fishing trip in Ilwaco.

“He did some stuff he wasn’t supposed to do,” Schabo said.

“That’s huge in this particular area,” he said.

Herrera Beutler, who largely eschewed on-the-ground campaigning and was boosted by millions of dollars of late PAC money, stressed local issues like the I-5 bridge that spans the Columbia and the dwindling salmon runs that pass under it.

“I’m the only one in this race who has the temerity and the fortitude to stand up to either party to do what’s right on behalf of people,” Herrera Beutler said Tuesday.

In 2020, Trump won 51% of the 3rd Congressional District, which now covers all or part of seven counties in Southwest Washington. It stretches from the fishing and timber towns on the Pacific Coast, east through Vancouver and its surrounding suburbs, to sparsely populated farmland and Skamania and Lewis counties.

Out waiving campaign signs on a hot and sunny highway overpass in Vancouver on Tuesday, she remarked on how she’s used to hard-fought campaigns in November but not in the primary.

“It’s so weird, normally it’s cold and you have a coffee and a coat,” she said. “But it’s August.”

Herrera Beutler was in second place on election night, with 24% of the vote, trailing Democrat Marie Gluesenkamp Perez, an auto repair shop owner and first-time candidate, who had 32%. Although Gluesenkamp Perez is leading, she’s doing so with a smaller share of the vote than the leading Democrat captured in both the 2020 and 2018 primaries, when Herrera Beutler won handily.

If Herrera Beutler does survive, she will also have Washington’s “jungle” primary system to thank, which sends the top two vote getters, regardless of party, to the general election.

The third, fourth and fifth-place candidates in early returns were all conservative Republicans who challenged Herrera Beutler over her impeachment vote. Combined, their vote totals far out pace Herrera Beutler’s, but the fractured far-right vote worked to her advantage.

“They’ve given her flack,” he said, “but she’s not afraid to say what’s true.”

Furin said he appreciated her work on salmon fisheries and on supporting law enforcement.

A Republican, Furin nonetheless called Trump “a demagogue” and the candidates vying for his support “puppets.”

“What he’s done is shameful,” he said. “I won’t support anything authoritarian.”

The crowded field, with candidates of overlapping constituencies, created all sorts of political chicanery leading up to the election.

A newly formed PAC, late in the campaign, dumped a quarter-million dollars behind Christian speaker and activist Heidi St. John, who had pledged to exit the race if she didn’t get Trump’s endorsement but nonetheless stayed in. There was speculation the true intent of the money was to siphon votes off the more viable pro-Trump candidate, Joe Kent, a former Army Ranger, splitting the far-right vote and allowing Herrera Beutler to slide through.

Likewise, Kent’s campaign sent mailers ostensibly targeting Gluesenkamp Perez, but whose true aim may have been to notify Democratic voters that there was a Democrat in the race, lest they be tempted to vote for the more moderate Republican, Herrera Beutler.

Many voters in Battle Ground on Tuesday were united in their desire to vote out Herrera Beutler but not in their conviction on who should take her place.

“I voted against the incumbent,” Joel Blanton, a real estate agent from Battle Ground said. “If she was so principled, where has she been? She hasn’t shown up here and explained her impeachment vote.”

Blanton voted for Kent, who was in third in early tallies.

“I’ve always voted for Jaime. I like Jaime, but she’s just been in there too long,” said Kristi Wilson, who works in health care patient services.

Wilson voted for St. John, who was in fourth.

If results hold, Gluesenkamp Perez would face Herrera Beutler in the November general election. Herrera Beutler would start as a substantial favorite. Democrats have spent heavily to defeat Herrera Beutler the last two elections — in years viewed as far more favorable to Democrats — but have come up empty twice.

Herrera Beutler has outraised Gluesenkamp Perez by more than 10 to 1.

“I deeply understand the struggles working families and small businesses are facing,” Gluesenkamp Perez said in a prepared statement Tuesday night. “While Congress has been cozying up to corporate special interests that prioritize taking care of the rich and powerful, the rest of us are falling further behind.”

She said Herrera Beutler is “not even close” to a moderate, faulting her for recent votes against protecting abortion rights, same-sex marriage and access to contraception.

Herrera Beutler said the initial primary results speak “more broadly to who I am as a representative here in southwest Washington.”

“I was so encouraged to hear from people of all political stripes,” she said. “Hardcore Republicans, Democrats and independents saying they’re going to support me primarily because of the local work I do.”