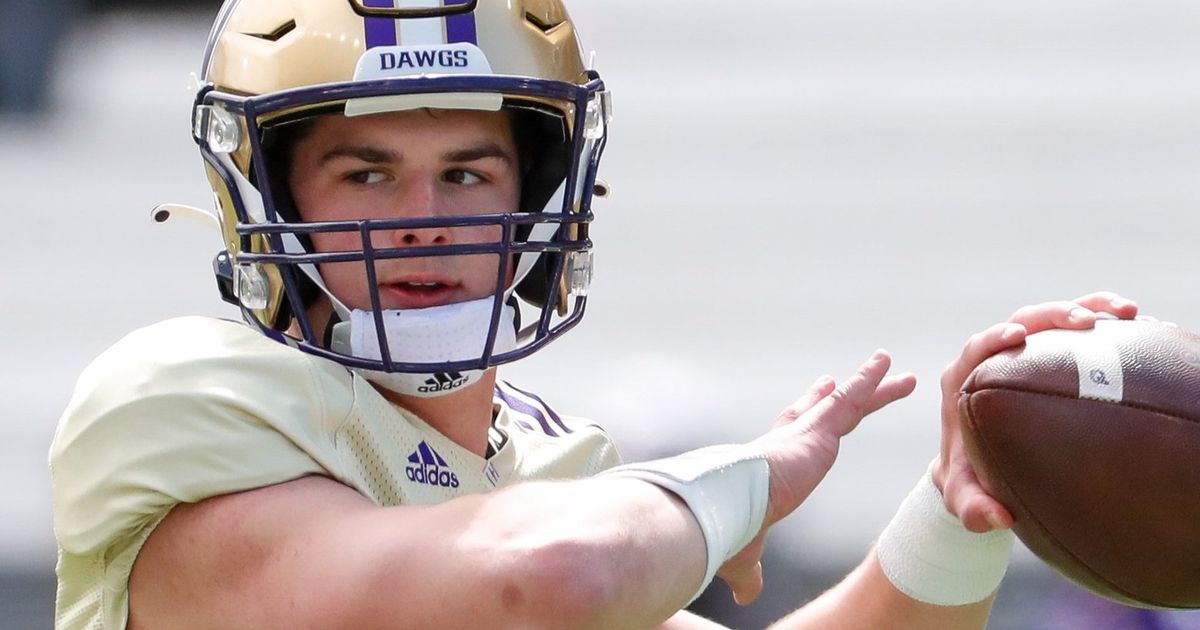 August is not for answers.

But preseason practice helps us understand the questions.

And as Kalen DeBoer embarks on his first fall camp at UW on Thursday, there is no shortage of questions swirling in Seattle. The Huskies have perhaps the Pac-12’s greatest chasm between ceiling and floor, as illustrated by a Pac-12 North division crown immediately followed by a 4-8 fiasco. UW’s roster is talented but precariously unproven, a hodgepodge of sleepers and transfers and former four-star recruits.

Can DeBoer and his new-look coaching staff build a mansion out of the available bricks? Or will the mismatched fragments return to rubble?

We’ll begin with the obvious. Junior Indiana transfer Michael Penix Jr., sophomore Dylan Morris and redshirt freshman Sam Huard are locked in a three-way quarterback competition this offseason, with the winner earning starting duties inside Husky Stadium on Sept. 3. Penix (who briefly excelled with DeBoer as his offensive coordinator at IU in 2019) and Morris (who struggled as UW’s starter last season) appear to be the front-runners, after each separated themselves throughout the spring.

The wild card is Huard, who struggled at times in April but flashed his five-star potential in the Spring Preview — completing 12 of 19 passes for 167 yards and a score.

We’ll be curious to see how reps are split this August, as well as DeBoer’s timeline for a firm decision.

One thing is clear: you can’t win a quarterback competition in summer conditioning.

“The reps are really what it comes down to, and who’s moving the ball in practice, who seems the most comfortable, who has the team from a leadership standpoint,” DeBoer said at Pac-12 Media Day Friday. “There’s things you take note of throughout the summer. You see the personalities come out, the relationships being formed.

“But I can’t say that those things (matter enough) where you say, ‘That puts so-and-so ahead of this guy.’ That’s what you’re trying to facilitate, is that growth. I’m excited to see that happening.”

Are the secondary starters as settled as they appear?

On paper, it’s easy to play favorites — to pencil in cornerbacks Mishael Powell and Jordan Perryman, safeties Alex Cook and Asa Turner and husky (nickel) Dominique Hampton as day one starters in the secondary. But is it possible outside contenders could leapfrog April incumbents?

The easy answer is yes. But there’s ground to make up. Cornerbacks Davon Banks and Elijah Jackson, safeties Cameron Williams and Julius Irvin and husky Kamren Fabiculanan have all previously contributed or appear primed to do so this fall. It will also be interesting to see how true freshman Tristan Dunn fits in, either at safety or Husky.

Regardless, Powell, Perryman, Cook, Turner and Hampton appear to sit in the pole positions — though in the current era of college football, other UW defensive backs will inevitably play. As that secondary strives to replace Trent McDuffie, Kyler Gordon and Brendan Radley-Hiles, an influx of quality competition would be most welcome at Washington.

Who will emerge next to Tuli Letuligasenoa on UW’s defensive line?

A fifth-year junior and All-Pac-12 honorable mention last fall, Letuligasenoa should be a mainstay on UW’s defensive line — after producing 36 tackles, 6.5 tackles for loss, a sack and an interception in 12 games in 2021. It’s worth wondering whether Letuligasenoa is capable of lifting his game to a more dominant level.

But the more immediate question may surround who lines up next to him.

Sophomore Faatui Tuitele tied for the team lead with three sacks last season, but missed the spring with an injury. Fellow sophomore Jacob Bandes is a former top-100 recruit who has yet to make a significant impact. Redshirt freshman Kuao Peihopa took a significant serving of starting reps last spring, but it’s hard to know if that amounted to an April mirage. And Voi Tunuufi (6-1, 258) — who produced 13 tackles and three sacks as a true freshman in 2021 — dropped 17 pounds this offseason and could ultimately wind up on the edge.

Of course, there’s a mountain of a question mark here — in the form of converted offensive lineman Ulumoo Ale. If the 6-6, 340-pounder can unlock his monstrous athleticism on the defensive line, UW could receive an immediate upgrade.

And for a unit that ranked 10th in the Pac-12 in opponent yards per carry (4.76) and 11th in rushing defense (194 yards allowed per game), immediate upgrades are warranted.

How will Jaxson Kirkland’s return impact the offensive line shuffle?

(Before you ask, the 6-7, 340-pound Kirkland — who added 30 pounds this offseason — still likely slots at left tackle. He told The Times last week that “being this big and having this frame and long arms, it just suits me well being there. I think I can play at the highest level at that position.”)

Judging by DeBoer’s comments last spring, Luciano seems to have solidified the center spot, while Fautanu — who he called “a phenomenal player” — could start at either left guard, right guard or right tackle. Don’t forget, either, that sixth-year veteran Henry Bainivalu — who has started 18 games at right guard — returns after being limited for much of the spring. DeBoer reported last week that Bainivalu has dropped 23 pounds while adding nearly 90 pounds to his bench press. “We’re counting on him,” DeBoer added.

If Kirkland, Luciano, Fautanu and Bainivalu are likely starters, that leaves Curne, Kalepo and Mele (not to mention Roger Rosengarten, Geirean Hatchett and others) to grapple for the remaining spot.

How many running backs can realistically contribute?

DeBoer made one intriguing comment that may have flown under the radar last week.

“The running back position is going to be interesting,” he said. “Some of those guys are coming back who we thought might be out of the mix with their injuries, which led to our recruitment of other running backs. All of a sudden you look at that group, and if they’re all healthy, you kind of look at that position and say, ‘Wow.’”

Emeka Megwa and Caleb Berry left the team this offseason, but Richard Newton and Cameron Davis — both of whom missed the spring with injuries — are expected to fully participate in camp.

Given that comment, there may have been internal concern that Newton or Davis (or both?) wouldn’t play again at Washington. Now, with both veterans adding to a group that also includes incoming transfers Wayne Taulapapa, Aaron Dumas and Will Nixon, plus redshirt freshmen Jay’Veon Sunday and Sam Adams II and capable walk-on Camden Sirmon, that’s a whole lot of bodies and precious few reps.

But can any be difference-makers? And how will carries and targets be divided this fall?

Those are August questions in need of September, October and November answers. But we have to start somewhere.