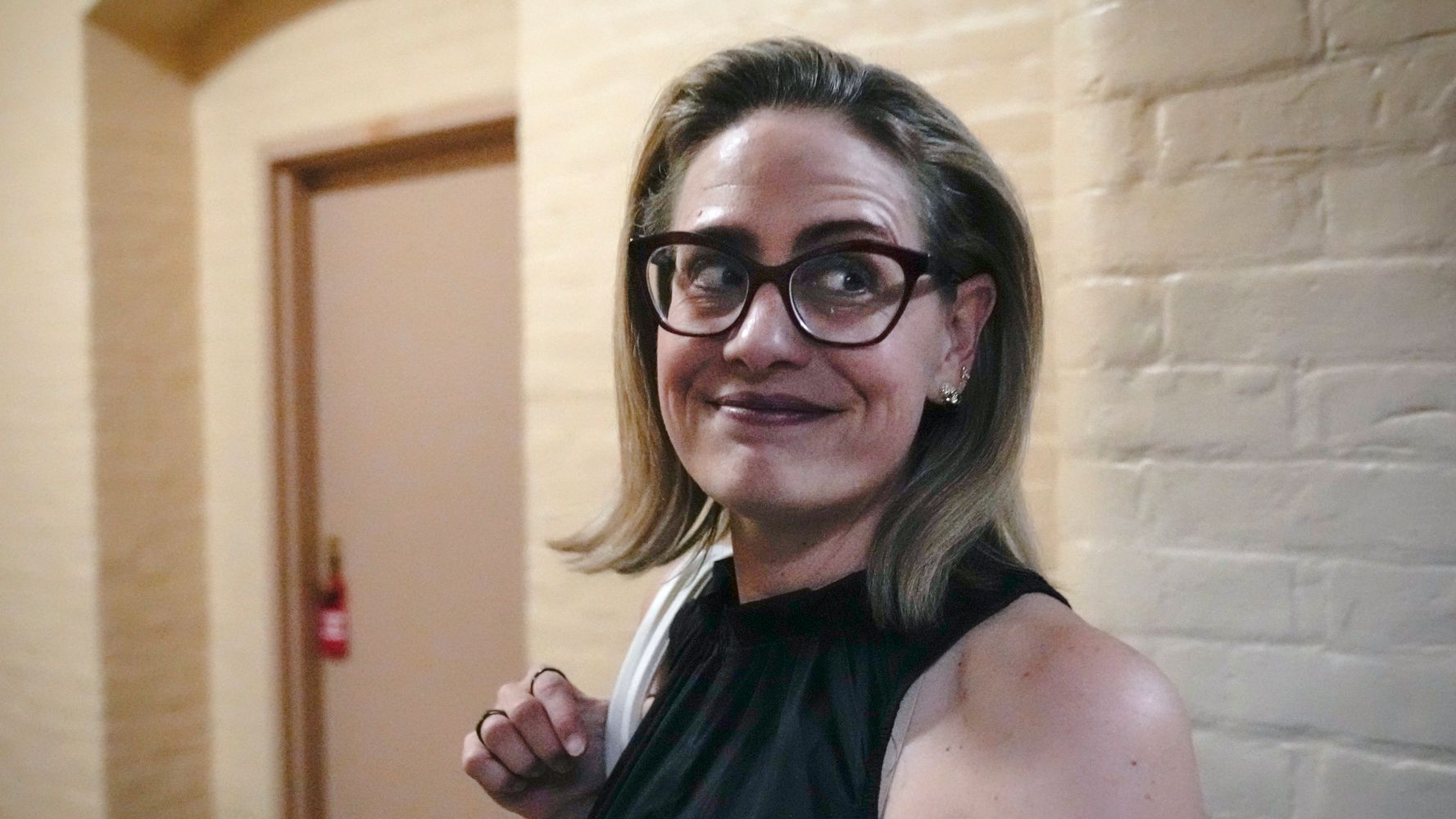 WASHINGTON ― Having finally convinced red-state Sen. Joe Manchin to support a historic climate and energy bill, Democrats are now waiting to hear from the other thorn in the their side: Kyrsten Sinema.

The moderate Arizona Democrat is keeping everyone in suspense on whether she will vote for the Inflation Reduction Act and bolster her party’s chances in the November midterm elections. That includes Manchin, who largely wrote the bill himself in secret talks with Senate Majority Leader Chuck Schumer (D-N.Y.).

Manchin talked to Sinema on the Senate floor during a vote Tuesday but declined to dish afterward. “We had a nice talk,” he told reporters.

“She’s contributed so much — a lot in this piece of legislation,” Manchin said earlier Tuesday in an interview with MSNBC.

“This is everything Kyrsten agreed to in December ― she signed off on the bill in December,” the West Virginia Democrat added in a separate interview with radio host Hoppy Kercheval.

“We’re doing more than praying, you know,” said Sen. Chris Murphy (D-Conn). “Obviously we’re going to make the case to her this is good for the country and good for Arizona. So, I think we’ll be able to get there.”

The new bill omitted a large swath of tax proposals that Democrats had previously sought to enact, including higher corporate and individual tax rates and higher taxes on capital gains — proposals that Manchin supported but Sinema did not.

However, it includes one tax proposal that Sinema may oppose: closing the so-called carried interest loophole that gives wealthy investment fund managers lower tax rates on their earnings than regular workers pay on their wages. Democrats have shaken their fists at the loophole for decades, but never done anything about it.

Business groups and private equity firms are lobbying Sinema to kill the provision, according to Bloomberg.

Several Democrats told HuffPost they didn’t hear from Sinema during their weekly caucus lunch, which was virtual in light of recent COVID-19 cases.

Sinema’s office did not respond to an inquiry about her stance on the bill this week.

Asked Tuesday if he has heard from constituents about the carried interest proposal, Sen. Mark Kelly, the junior senator from Arizona who is up for reelection this year, said, “I hear a lot about prescription drugs.”

But the legislation mainly raises revenue through a new corporate minimum tax and tougher IRS enforcement of current tax laws — things Sinema previously supported. The carried interest piece brings in only $14 billion out of the several hundreds of billions coming from the other provisions.

The twin centerpieces of the legislation are a $300 billion investment in green energy and a hugely popular proposal allowing Medicare to negotiate lower prescription drug prices. The Inflation Reduction Act would also cap out-of-pocket drug costs at $2,000 per year for seniors enrolled in Medicare.

Democrats are planning to use a legislative maneuver called reconciliation to pass the bill with only 50 votes. This means they can’t afford to lose any support in their caucus if it is to become law.

“Without all 50 of us, it doesn’t happen,” Sen. Mazie Hirono (D-Hawaii) acknowledged Tuesday.

Democrats could strip out the carried interest provision when the Senate begins voting on amendments to the bill, but Manchin is, for the moment, insisting it remain in place.

Sinema has been outspoken on the need to fight climate change. Her state, like others in the western part of the country, has suffered from severe drought and wildfires that have been exacerbated by global warming.

Democratic senators are hopeful that she will come around.

“I would hope that she would be supportive,” said Sen. John Hickenlooper (D-Colo.). “I think she understands the climate risks. I mean, who doesn’t at this point?”