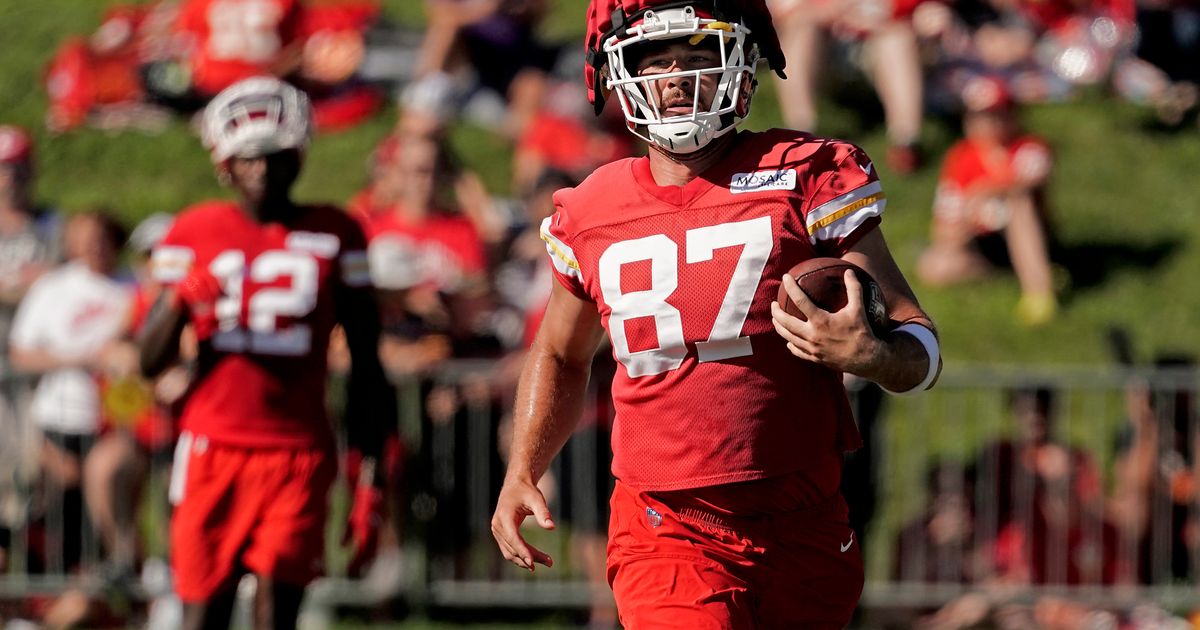 ST. JOSEPH, Mo. (AP) — Andy Reid will always have a special fondness for Travis Kelce, one of the first players that the Kansas City Chiefs drafted after the coach took over a downtrodden franchise following his own frustrating finish in Philadelphia.

Reid had drafted his older brother, Jason, to play center for the Eagles, and through that process got to know the entire Kelce family. So when then-Chiefs general manager John Dorsey floated the idea of taking Travis in the third round of the 2013 draft, despite some off-the-field issues at Cincinnati, Reid had a pretty good idea of what to expect.

“He was a little wilder than his brother,” Reid said with a smile. “I knew that.”

The past nine seasons have been — well, a little wild.

There’s been the highs of four consecutive AFC championship games and back-to-back Super Bowl appearances, including the first championship for the franchise in 50 years, while Kelce has been voted a first-team All-Pro three times and made seven trips to the Pro Bowl. And there’s also been the lows of bitterly close playoff losses, injuries and COVID-19, and more than one very public spats with players, referees and even Big Red himself.

Now that Kelce is one of the league’s elder statesmen, though, and the longest-tenured member of the Chiefs, it is only natural to begin wondering how long the tight end will continue to perform at the highest level of the game.

And whether he will do something increasingly rare in the NFL: play his entire career with one franchise.

“I don’t plan on playing anywhere else. Hope the Chiefs have that in mind, too,” said Kelce, who is signed through the 2025 season, at which point only six other players would have played more seasons with the club than him.

“I love being here. I’ve done everything I can to do things the right way. I’m going to continue to do that, and they know what kind of player they’re going to get.”

One that continues to defy age.

Even though Kelce turns 33 in October, he is coming off one of the best seasons of his career, catching 92 passes for 1,125 yards and nine touchdowns. It was his fourth straight year of at least 90 catches, his sixth with at least 1,000 yards, and his touchdown total was just two off his career best set during the 2020 season.

In fact, the argument could be made that Kelce has been getting better with age.

“It’s crazy,” Chiefs general manager Brett Veach said, “because he’s played, you know, for a little bit now, and he’s already accomplished so much. But every year he comes into camp in great form, and he’s one of those kinds of outliers that defies the odds. He kind of shows up and doesn’t look like he’s missed a beat. He’s still out there doing his thing.”

Kelce was once the new kid in the locker room with the attitude to match, and his competitive nature often got the better of him. There was the time he tossed a towel at an official after a no-call against Jacksonville, and his public criticism of Reid’s play-calling after a loss to Tennessee.

These days, a much more mature Kelce has become like a coach on the field. On consecutive plays during 11-on-11 drills Wednesday, he first offered advice to wide receiver Justin Watson, then did the same to running back Ronald Jones II.

Hard to believe it’s the same wild child the Chiefs drafted nearly a decade ago.

“We’ve had our little conflicts,” Reid admitted, “but he’s a great kid. He’s got a great heart. He’s always had that.”

That’s demonstrated by his work with his own Eighty-Seven & Running foundation, which helps underserved youth in the community, and Operation Breakthrough, a nonprofit that provides a safe environment for children in poverty.

“He’s still, in our opinion, the best tight end in the game,” Veach said. “And you know, if there’s one guy that can defy the odds of time and, you know, finish his career — start in one place and finish in the same spot — it’s Tavis Kelce. He shows no signs of slowing down. And that’s something exciting for us and our fans, for sure.”

Notes: The Chiefs moved their workout indoors Wednesday because of storms that rolled through northwest Missouri. … Rookie WR Skyy Moore (quad) practiced in a full capacity, though he did botch a punt return catch and dropped an open pass during team drills. … Most of the work Wednesday had to do with scoring in the red zone. “It was great competition all the way around,” Reid said. … DE Carlos Dunlap is expected to practice for the first time Thursday. The two-time Pro Bowl selection signed a contract last week worth up to $8 million for the 2022 season.