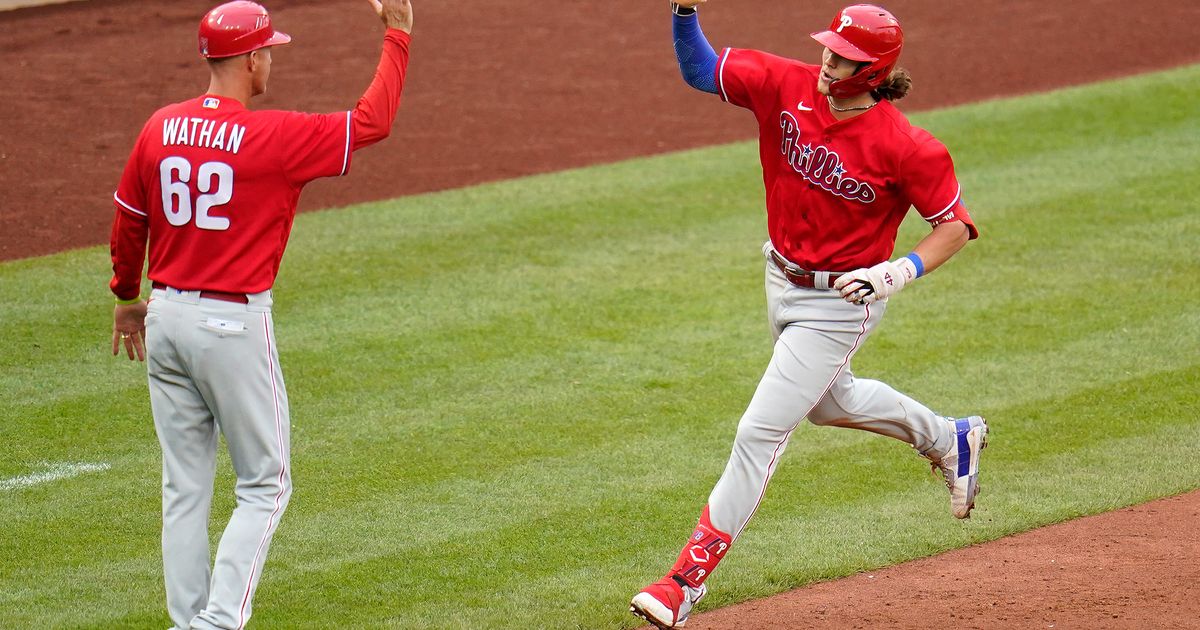 PITTSBURGH (AP) — Alec Bohm fell a triple shy of the cycle, tying a career-high with four hits in an 8-2 win for the Philadelphia Phillies on Sunday that completed a four-game sweep of the Pittsburgh Pirates.

Bohm hit his seventh homer of the season in the sixth, a solo shot that gave him four hits on just five pitches and extended Philadelphia’s lead to seven runs. It was his second game with four hits in the majors, the first since going 4 for 5 against the Washington Nationals on June 23 last year.

The 25-year-old, drafted third overall in 2018, doubled in the first and singled in the third and fifth. Bohm grounded into an inning-ending double play in the eighth.

Nick Castellanos also had four hits, with his fourth single coming in the ninth.

Philadelphia had 18 hits to win its fifth straight and hand Pittsburgh a seventh straight loss. The Phillies have won six of seven since being swept by the Chicago Cubs in three games from July 22-24.

Four straight singles off JT Brubaker (2-9) highlighted a five-run fifth. Bohm and J.T. Realmuto got the first two, and Castellanos and Bryson Stott had another pair, driving in one run each. Dillon Peters replaced Brubaker, allowing RBI singles to Matt Vierling and Odúbel Herrera for a 7-1 Phillies lead.

Kyle Schwarber led off the inning with his National League-leading 33rd homer, sent 441 feet into the left field bleachers.

Brubaker, who allowed seven runs on 12 hits in 4 1/3 innings, opened with two straight strikeouts but gave up four consecutive hits and fell behind by two runs in the first. Bohm and Realmuto had back-to-back doubles, and Castellanos and Stott followed with two singles.

Bohm, Realmuto, Castellanos and Stott were a combined 10-for-12 against Brubaker.

Cal Mitchell doubled in the third for the Pirates’ lone run. Pittsburgh got a run in the ninth off of Jeurys Familia, who pitched for the first time since giving up five runs and getting one out in the ninth inning of Philadelphia’s 8-7 win over Pittsburgh on Thursday.

Phillies: INF Edmundo Sosa reported to the team after being acquired in a trade from the St. Louis Cardinals on Saturday. … INF Johan Camargo was optioned to Triple-A Lehigh Valley.

Pirates: OF Bryan Reynolds was reinstated from the paternity leave list. … INF/OF Diego Castillo was optioned to Triple-A Indianapolis.

Pirates: 3B Ke’Bryan Hayes was scratched with left knee discomfort. He is day to day.

Phillies: Philadelphia opens a two-game set Tuesday in Atlanta against the Braves.

Pirates: RHP Bryse Wilson (1-6, 6.31 ERA) will take the mound Tuesday for the first of a three-game series against Milwaukee. Wilson has allowed fewer than four earned runs in four straight starts since giving up seven to the Cardinals on June 14.