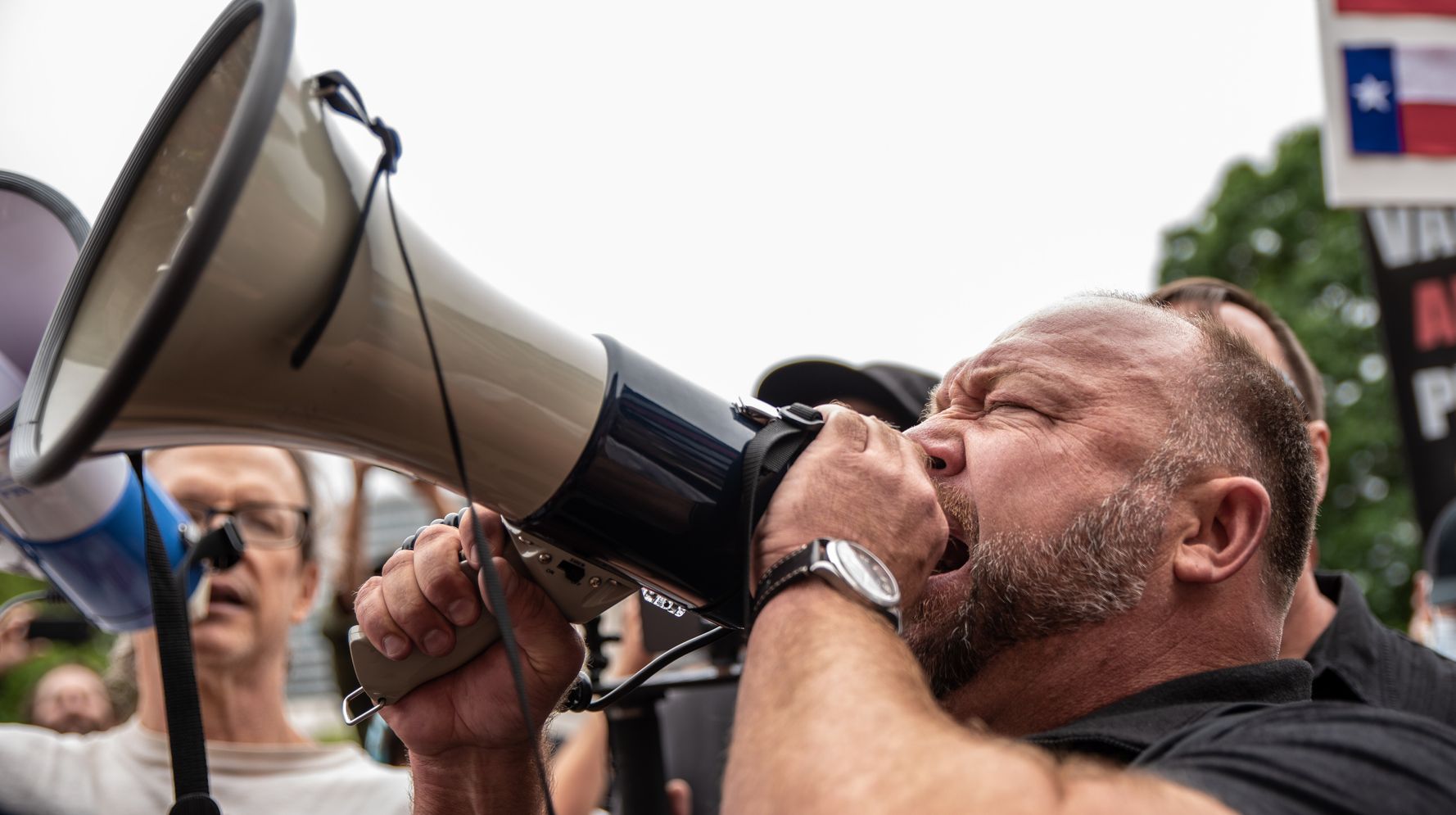 Far-right conspiracy podcaster Alex Jones gloated on his program about how his latest bankruptcy scheme would slash defamation damages to Sandy Hook families and tie up even the reduced amounts “for years.”

Jones was found liable for defamation last year in cases in Connecticut and Texas for repeatedly insisting that the 20 first-grade children killed in a mass shooting at Sandy Hook Elementary School in 2012 in Newtown, Connecticut — and their devastated parents — were actors in a fake anti-gun stunt staged by the U.S. government. (Six adults were also killed.)

The trial in Texas, where Infowars is based, is currently being held to determine the amount of damages Jones must pay.

Jones attempted — and was forced to drop — a similar ploy earlier this year when he filed a bankruptcy case for Infowars and for trademark and web-domain rights holding companies in a bid to force a restrictive monetary settlement with the Sandy Hook families.

Jones claimed on his podcast Sunday that his current bankruptcy filing would slash the bond he’ll have to post for an appeal to only half of his (declared) net worth— and then he still plans to tie whatever damages are decided within that reduced amount “for years” as his Infowars podcast continues to operate. He also claimed “we’ve never lied” and that “all we have is our credibility.”

Alex Jones says he filed for bankruptcy so his appeal bond on the Sandy Hook judgment will now only be half his net worth, allowing him to tie it up for years and stay on the air. pic.twitter.com/pHdL1ai48H

Jones’ money scheme was being played out during dramatic testimony over the pain and suffering of the Sandy Hook families, who not only grapple with the loss of their children in a mass shooting but also are forced to face harassment and death threats by Jones’ unhinged supporters who are weaponized by his lies.

Parents of the dead children are suffering from both post-traumatic stress disorder and a constant fear that Jones’ followers will kill them, a psychiatrist testified Monday in Jones’ Austin, Texas, defamation trial.

“The overwhelming cause of their pain is what Jones is doing,” said Roy Lubit, a forensic psychiatrist hired by the plaintiffs.

Lubit pointed to the experience of plaintiffs Neil Heslin and Scarlett Lewis, who lost their 6-year-son, Jesse Lewis, in the massacre.

Heslin has been accosted on the street, and Lewis has installed surveillance equipment and sleeps with a gun, knife and pepper spray at her bedside.

Families are not backing off the fight, despite Jones’ latest bankruptcy plot, said their lawyers.

Jones “has once again fled like a coward to bankruptcy court in a transparent attempt to delay facing the families that he has spent years hurting,” Connecticut lawyer Chris Matei said in a statement.

But lawyers raised concerns in court Monday at a hearing over the bankruptcy filing about the structure of Jones’ latest move — and his timing.

Free Speech Systems is seeking a special kind of bankruptcy protection that allows small businesses to speed through insolvency, Bloomberg reported. It’s generally aimed at companies that owe less than $7.5 million. The Infowars parent is claiming more than $50 million of debt — much of it owed to PQPR Holdings, which is owned by Alex Jones, according to yet another lawsuit against Jones.

“There are lots of red flags circling this bankruptcy,” Avi Moshenberg, a lawyer involved in a fraudulent transfer lawsuit against Jones and Infowars in Texas, said at the Chapter 11 hearing. “This is hardly a small business.”

Alinor Sterling, an attorney representing Sandy Hook families in one of the defamation suits, expressed “serious concerns” at the hearing “based on discovery done in Connecticut that Alex Jones has been systematically siphoning large amounts of money out of Free Speech Systems.”

In the bankruptcy filing, Free Speech Systems listed $14.3 million in assets, including almost $1.16 million in cash and close to $1.6 million in property and equipment as of May 31, The Associated Press reported. It also claimed $79 million in liabilities, with a $54 million debt owed to PQPR Holdings.

Jones will next face a Connecticut jury in September to determine damages in that case. Jury selection began this week.

Jones, who is linked to extremist groups behind the storming of the U.S. Capitol on Jan. 6, 2021, is also the focus of investigators for his role in planning events preceding the violence.