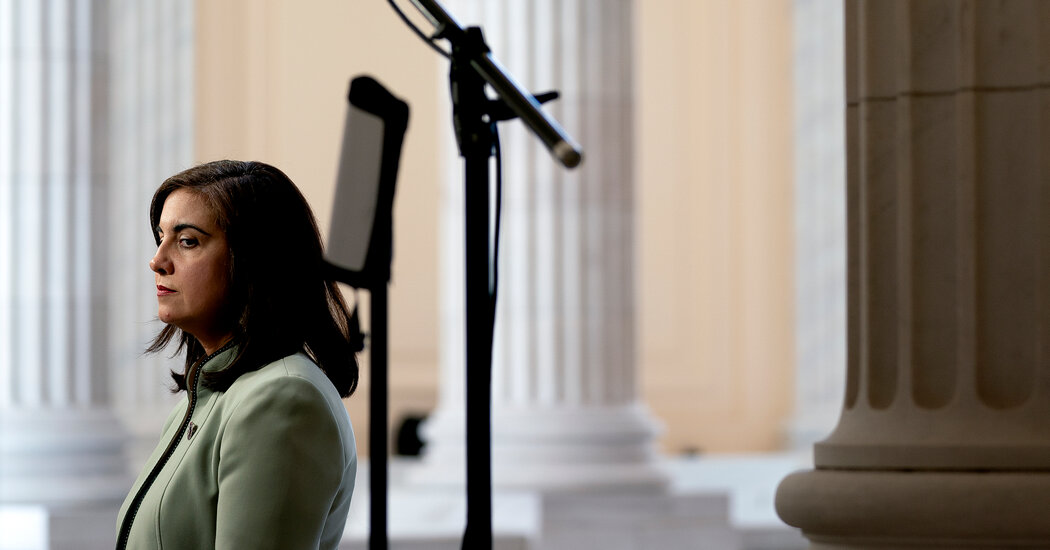 As the lone Republican in the New York City congressional delegation, Representative Nicole Malliotakis has adopted certain stances that would make her an understandable outlier in a deeply Democratic city.

Just days after taking office in early 2021, she voted to discard the legitimate 2020 election results, voting for a debunked conspiracy theory that claimed President Donald J. Trump actually won the election. She followed up by voting against Mr. Trump’s second impeachment as a result of the deadly Capitol riots of Jan. 6, 2021.

But as she seeks re-election in November, Ms. Malliotakis has tried to tread a finer line around guns and abortion, two polarizing social issues that have taken on added prominence in light of recent Supreme Court decisions. (In June, the court overturned the federal right to abortion, as well as a New York law governing concealed weapons.)

On guns, for example, Ms. Malliotakis has voiced some support for new regulations, even voting for several Democratic gun control bills proffered in the wake of the massacres in Buffalo and Uvalde, Texas. She later, however, voted against the omnibus bill package, contending that it was “constitutionally suspect” and “represented a partisan overreach.”

Ms. Malliotakis opposes abortion rights, favoring restrictions on using taxpayer funding for the procedure and on late-term abortions. But she has said that she believes that abortion should be allowed under certain circumstances, such as when the life of the mother is at risk.

But Ms. Malliotakis has also tried to maintain some distance from the court’s decision in Dobbs v. Jackson Women’s Health Organization, which overturned Roe v. Wade, saying in a recent interview that she “didn’t weigh in on it.” Yet earlier this month, the congresswoman voted against a pair of bills that would have banned states from restricting abortions and prohibited them from blocking access to out-of-state abortion services.

Republicans, who are expected to fare well in November’s midterm elections, have long fought to overturn Roe. Yet some of the party’s candidates have not rushed to embrace the Dobbs ruling, wary of alienating voters who, according to polls, may be swayed by social issues in ways that help Democrats.

Ms. Malliotakis is a prime example. Her district encompasses Staten Island and a swath of southwest Brooklyn, some of the city’s most conservative areas. Yet New York remains an overwhelmingly Democratic city, and the recent Supreme Court rulings were profoundly unpopular here.

So, like many of her Republican colleagues, Ms. Malliotakis, a first-term congresswoman, is instead trying to steer the conversation toward bottom-line issues like inflation and high gas prices.

“People are struggling putting gas in their tanks, putting food on their tables, paying their bills,” Ms. Malliotakis said in a recent interview.

“For some people who are single-issue individuals, it could potentially have an impact,” she added, of her statements on guns and abortion. “But I know that crime and pocketbook issues are the most important issues to the people I represent.”

Ms. Malliotakis is expected to easily win her Republican primary next month against John Matland, a badly underfunded rival, setting her up for a likely rematch against Max Rose, the former Democratic congressman whom she unseated in 2020.

Mr. Rose, a combat veteran who was wounded in Afghanistan and awarded the Bronze Star, has sought to tie Ms. Malliotakis to the extreme elements of the Republican Party, including Mr. Trump, and to the Capitol riot by the president’s supporters, saying he is running to protect “the soul of America.”

“Everything that our country was built upon wasn’t just spit at: They tried to destroy it,” he said during a campaign walkabout on July 11 in Bay Ridge. “And even after — even after — Nicole, and everyone else in Congress who were almost killed, they still voted to decertify.”

He is also openly derisive of Ms. Malliotakis’s seeming duality on some hot-button issues, mocking her limited embrace of gun control, for example, as nothing more than “a few ceremonial votes.”

“When it came time for the package to be voted on, as she always does, she played both sides,” he said, referring to the omnibus bill. “Voted for it before she voted against it. Who knows what’s going on here?”

Mr. Rose has also held a handful of public events after the Supreme Court ruling on abortion — including one at Ms. Malliotakis’s Brooklyn district office in Bay Ridge — to portray her as out of touch with her district, even on Staten Island, saying the congresswoman is “on the wrong side of history.”

“I generally do believe that when it comes down to it, people are on the side of women having the opportunity to make those decisions for themselves,” he said.

In recent weeks, Mr. Rose continued that line of attack, saying the congresswoman had “tweeted over 180 times and issued 13 press releases” since the Dobbs decision, but “has said nothing about millions of women losing control over their bodies.”

When asked specifically about the Dobbs decision that overturned Roe, Ms. Malliotakis demurred.

“My constituents, they know that nothing is going to change in New York,” she said. “The Supreme Court interprets the Constitution, so we have to accept the Supreme Court’s decision regardless.”

Ms. Malliotakis’s comments have also given fodder to her opponents on the right, including Mr. Matland, a health care worker who lost his job for refusing to be vaccinated, and who is seeking to oust Ms. Malliotakis in the Aug. 23 primary with a low-budget, anti-establishment campaign.

Mr. Matland, who is making his first run for public office, said that Ms. Malliotakis has “often alienated the Republican base,” and that she has only been voted into office because of her name recognition — she served five terms in the State Assembly and ran unsuccessfully in 2017 for mayor of New York City — and her district’s aversion to Democratic candidates.

“People say ‘I only voted for her’ — and I’m guilty of this myself — ‘because I thought she was a much better option than Max Rose,’” Mr. Matland said, adding, “And that’s the exact reason we have primaries: so we can get a better option.”

Considering the likelihood of a tough year for Democrats nationally, most observers think that Mr. Rose will have an uphill battle in November, assuming he wins his primary in August against two challengers: Brittany Ramos DeBarros, a progressive community activist, and Komi Agoda-Koussema, an educator.

Mr. Rose’s campaign was also dealt a setback earlier this year when a state judge threw out new Democrat-drawn congressional lines that could have tilted the district heavily in his favor. The refashioned lines, drawn by a redistricting expert in May, left the district looking largely the same, though its section of Brooklyn — about half as populous as the Staten Island portion — did favor President Biden over Mr. Trump by about 12 points in the 2020 election.

Ms. Malliotakis accused Mr. Rose of entering the race only “because he thought they were going to change the lines in his favor.”

“The good news about reruns is we know how they end,” Ms. Malliotakis said of her rematch against Mr. Rose.

Vito Fossella, the Republican who serves as the Staten Island borough president, echoed that sentiment, saying he didn’t “see how the dynamics” of the race have changed much since 2020, and suggesting that abortion and guns would not be major issues for Staten Island voters.

“On balance, what people care about is ‘Are we safe? Are we comfortable economically? Do we have a brighter future?’” said Mr. Fossella, who is a supporter of Ms. Malliotakis.

A path to re-election for Ms. Malliotakis, 41, will likely include a big win on the island’s South Shore, a Republican stronghold, to offset the more liberal neighborhoods in the north. And for South Shore residents like Edward Carey, a retired banking executive who winters in Florida but has a house in the Eltingville neighborhood, Ms. Malliotakis is already a sure thing. He noted the backing of Mr. Fossella, as well as other factors.

“She’s a Republican, she’s a woman, she’s young,” said Mr. Carey, 83, a registered Republican who said the last Democrat he voted for was John F. Kennedy. “That’s good enough for me.”

“It’s not that they’re Republican or Democrat, left-leaning or right-leaning: It’s whether or not that candidate speaks to what touches Staten Islanders,” she said, noting the island’s recent history of vacillating between parties. “Anybody who thinks that they can put their finger on the pulse of Staten Island voters doesn’t know what they’re talking about.”

She also criticized Ms. Malliotakis for being wishy-washy on critical issues, but noted that voters don’t seem to care.

Vin DeRosa, a patron at Jody’s Club Forest, a popular bar near the North Shore where Mr. Rose has been known to drink, is a registered Democrat but said he considers himself an independent who “votes for the person” rather than the party line.

Mr. DeRosa, a retired telecommunications professional, said that he had voted for Mr. Rose in 2020, and that he likely would again, if only because of Ms. Malliotakis’s association with Mr. Trump.

“I’m not sure I want a congressperson who has to call Mar-a-Lago,” Mr. DeRosa said, “to find out what to do.”